Henry: [hides in a tunnel] The rain will spoil my lovely green paint and red stripes – Thomas and Friends

Nenthead has a rabbit problem. Every bank, every verge, every sloping field (and all the fields are slopes) is absolutely riddled with the most enormous warrens. Some banks were completely devoid of any vegetation as the rabbits had eaten every shred of grass. The sandstone soil here is extremely easy for them to tunnel… harder for the human miners who dug all sorts of minerals out of the Earth here: lead, copper, zinc, baryte, haematite, tungsten, fluorite, graphite and coal.

At Nenthead we picked up the start of a local path called Isaac’s Tea Trail. Research showed this to have a not-terribly-interesting backstory, and the footpath was a physical analogue of the dreariness of the route’s conception, not helped by the dullness of the sky.

After a couple of kilometres wading through wet grass on a steep camber we gave up and legged it along the road itself as being a more effective way of getting into the little town of Alston which is where our route proper started today.

But not before we had passed a house which had converted its garden into a model village, including a replica of Graceland which starts playing ‘Are you lonesome tonight?’ when you stand in front of it. 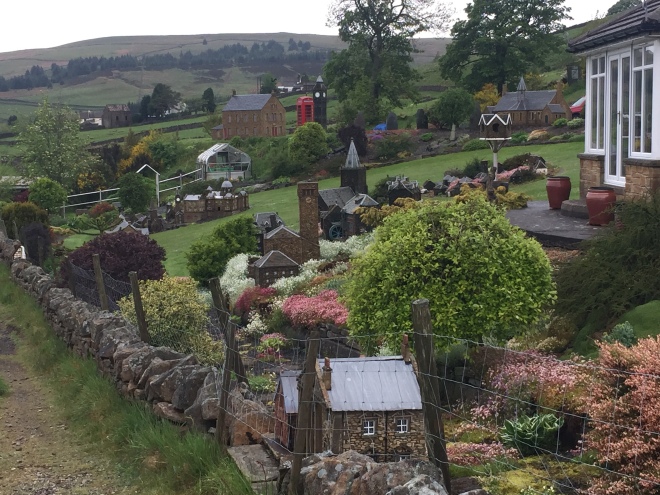 The South Tyne Trail which we had seen at its inception yesterday here runs along the old railway tracks along the river valley, criss-crossing the South Tyne as it flows east along the valley bottom. For the first few miles the trail is a path alongside a narrow-gauge heritage railway. 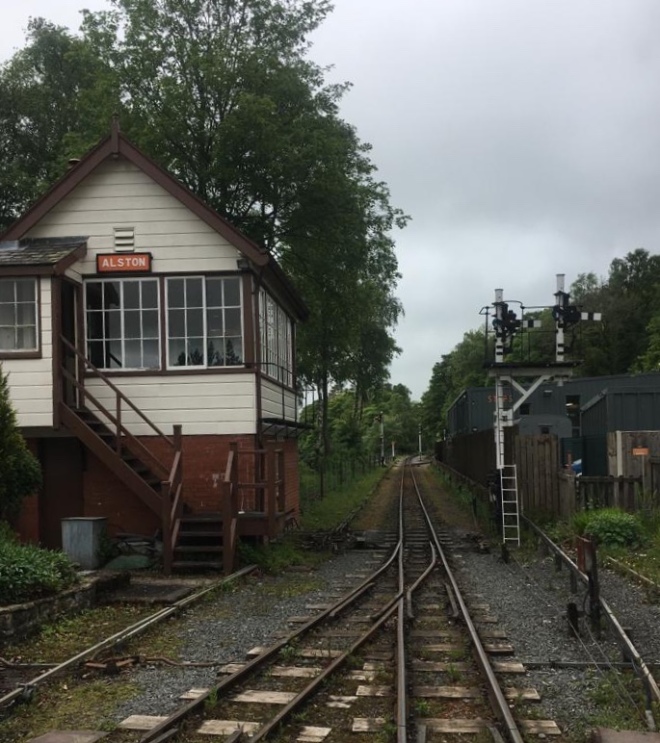 I missed the four guards signalling to couple a train called Old Rusty to two diesel carriages because I was in the loo, but Stephen told me all about the excitement. The track runs 13 miles between Alston and Haltwhistle, where our day’s walk was going to end. There was an excellent café at the station at the start where we continued our research in our quest to find the nation’s best cream tea.

Shortly after we set off, admiring all the little painted railway station buildings, it started to rain. It was a persistent particularly wet kind of rain which drenched everything, and by the end of the day, five hours later, we were soaked through to the skin. However, that did not mean it was not a nice walk. There were surprisingly many things to see.

First and foremost the River Tyne, or rather the south branch of it, which we had seen at its source up in the hills. It was to get bigger and bigger throughout the day, swollen by the recent heavy rains.

The stations, cuttings and bridges provided interest, and I’m sad to say that we missed the bridge with the plaque which signalled our transition from Cumbria to Northumberland. Northumberland: last stop before Scotland. 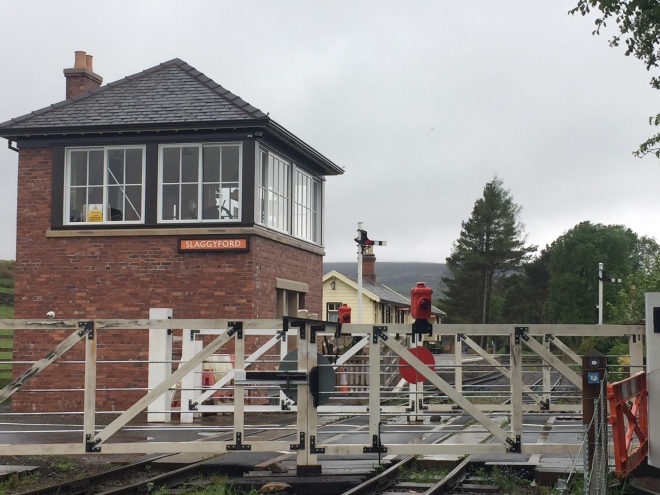 There were rabbits all along the track – perhaps a rabbit diaspora from Nenthead. In one place, it seemed that they had undermined the bank so much that they had been the cause of several fallen trees.

The real feature of the walk was the viaduct. Built in 1852 it spans the River Tyne at a height of 33m, with three of its nine vast spans standing in the river. 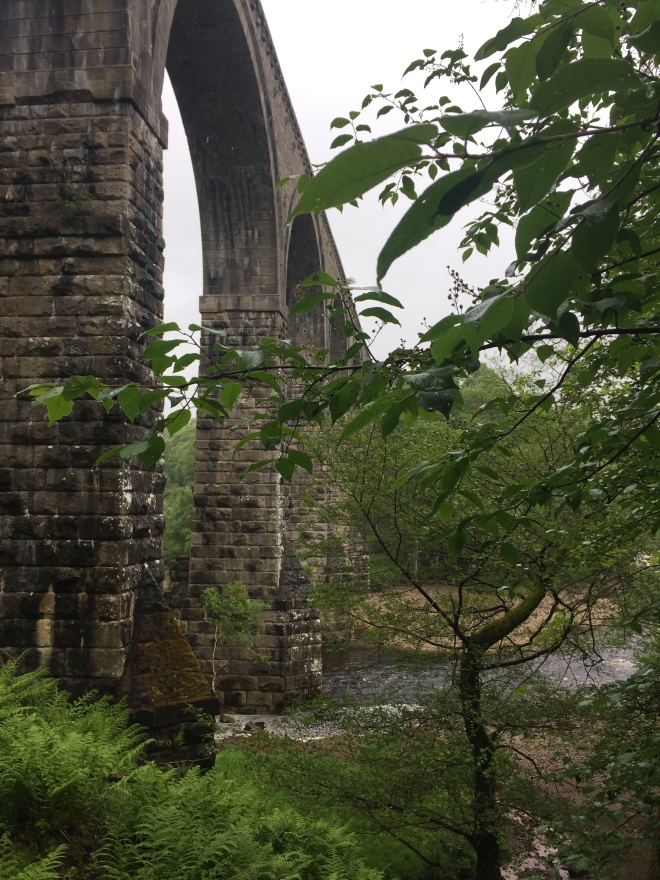 We stopped under its arches to eat cheese and pickle sandwiches which in the cold and wet seemed like the most delicious thing we had ever eaten. Thank you Mary. The path cut up onto the top of the viaduct from where we looked down onto the riverbed. It is quite incredible that in the space of a few 10th of kilometres a tiny stream could swell from a trickle of water out of a rock to a sizeable river.

At Slaggyford station railway line stops. The trail continues on the bed where the tracks used to run but there was no further trace of track, stations or any other sign apart from the dead straight and level path that this had once been a railway line.

We were able to walk at a constant speed of 5.2 km an hour through the rain. There was the odd glimmer of sunshine , And sometimes when it was raining too, but there were never any rainbows. Colour was provided by the wildflowers, all carrying droplets of water from rain, now softened to a mizzle.

It was still raining as we came into Haltwhistle 31km after starting. We had to scurry across a phenomenally busy A-road to reach the town and cross what had been the final railway bridge over the now substantial South Tyne before getting to the station.

On the outskirts of Haltwhistle we sheltered in an underpass trying to use the small-scale map to work out the best road to take to find a café to dry out in when a kind man with a strong Geordie accent pulled over, rolled down his car window and gave us some advice about where to go.

The Manor Inn did us some super hot chocolate, soup and quiche. I even managed to dry my hair under the hand dryer in the loos, and changed into the dry clothes I had brought with me. In the bar the cricket was on and we timed our arrival to coincide with Ben Stokes’s amazing one-handed catch in the England V South Africa World Cup match at the Oval.

Mary picked us up, took us and all our wet things home for the second day running, and we dried everything out again. After more wonderful food we packed for an early start tomorrow and chatted until late. Thank you Mary, for looking after us so beautifully.

Today’s mystery egg found by the side of the road.