We all want to escape our circumstances. -– Benedict Cumberbatch

We awoke at 5am and the very first thing we did was to unzip the flaps of the tent and check the skies. We had not been aware that there had been any rain overnight – we had slept well – and we were hoping that the forecast had been right: that there had been no serious rain for twelve hours. The clouds were low but hard to read. It wasn’t raining. The sound of the river was still a constant presence but I wouldn’t have described it as a jet engine. Would the rivers have gone down enough to cross?

We ate dry food for breakfast, as being a quick option which allowed us to get going earlier: we didn’t know how long it was going to take to slog upriver until we found a place to cross, then back down again. We estimated in total about 5km across the bogs to be able to get back down to the other side opposite where we were camped on the wrong side of the river. This was the escape plan:

Everything bar the tent was packed up and ready to go by about 7am. We kept checking out of the doors of the tent and although clouds were low and scudding over, and the tops were in mist, the clouds over us were perhaps starting to break up. We heard a solitary bird singing and interpreted that as being a sign that it wasn’t going to rain so we took down the tent inner and packed that away. No sooner had we done that and were reaching for our wet boots than the rain came pattering and spattering on the fly sheet again. A brief shower or something more prolonged? Enough to swell the rivers again?

So we lay on our backs trying not to put holes in the groundsheet from the heather stalks (and I wondered how I had managed to somehow pierce a hole in my sleeping mat yesterday evening), watching ourselves getting chillier and keeping our socked feet up on our packs so they weren’t on the cold ground.

At about 7.30 the rain had stopped for long enough for us to take down the tent that had sheltered us for two nights and a day. We also took a moment to appreciate the small but effective near-platform of rock standing slightly above the rest of the bog. It had been a good place. I checked the geology app and saw that right exactly where we were, there was an intrusion of much harder igneous bedrock, meladiorite and hornblende, into the surrounding sea of sandstone. 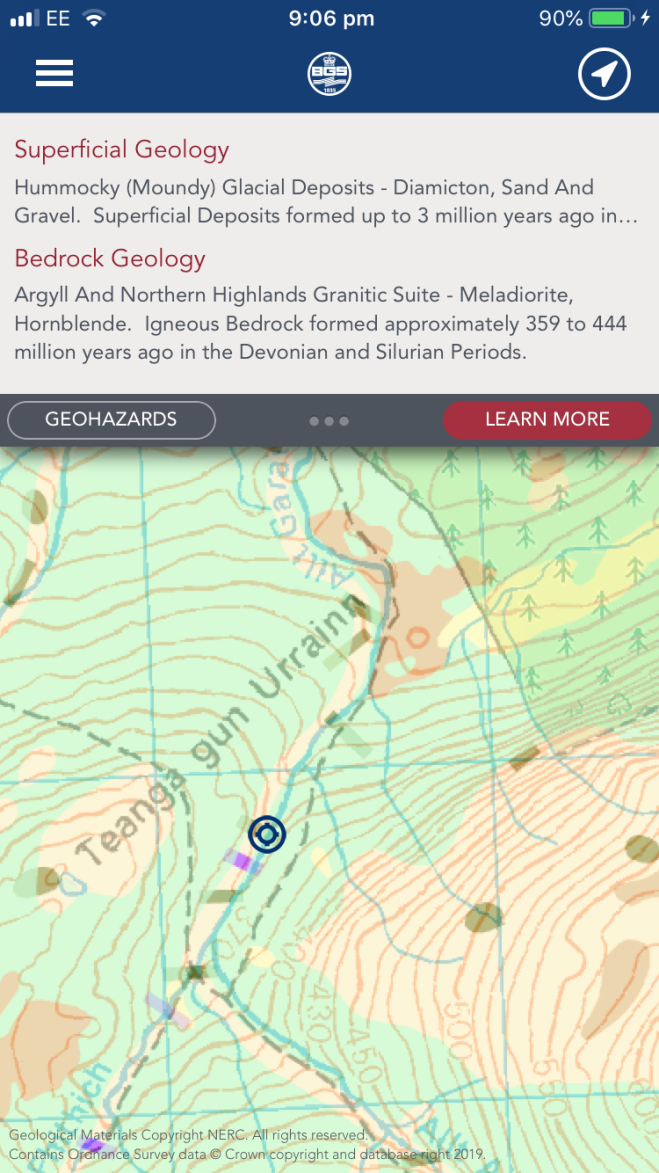 It had been there for approximately 400 million years before we were glad of it, a patch of harder ground meaning that the bog was slightly less, enough for us to camp on.

The time had come. We staggered down to the river over the bog tussocks to take a view.

It was extraordinary. Overnight what had been a raging, roaring tiger of a torrent had quietened to a pussycat of a stream. Boulders stuck out everywhere, slabs of flatter rock. Gravel banks. We only needed to track up a few tens of meters to find a place where we could easily cross almost without wetting the tops of our boots further.

And from there we descended rapidly over the hanging bog, stepping on the heather and the reedy tussocks, until, more quickly than we possibly could have hoped, we were standing at the edge of the gritty, beautiful, glorious path that we’d been looking at but unable to reach for the last day and a half. It wasn’t our original route – but it would get us out.

On the way down the path (and we were in appreciating the almost miraculous speed with which we could cover ground) we went over and over our decision-making processes since leaving Fort William. Could we have avoided getting in that situation? Had we been foolhardy? Had we made any decisions that we should have made differently? We came to the conclusion that given the information we had had at each stage our decision had been correct. Rain has been forecast, but not to excess. The walking up to the col was very arduous, but given the compass of our previous walking experience, not dangerous. We had achieved the first river crossing with a bit of creative effort but still with relative ease, and it had been eminently reasonable to trust both map and guidebook in expecting that the footbridge for the second river crossing would be there.

The guidebook gives an escape route from the col but there had been nothing to indicate when we were up there that we would need to take it – because we had no way of knowing that the footbridge would not be there. For instance, the stream in the valley we had taken to get to the col was not swollen at all. The guidebook gives a wet weather alternative called the Fedden route – and at about 7pm on the Monday night once we realised we were stuck we had phoned David, who was a day behind us in Fort William for his birthday, to warn him off the route over the col.

But our issue with the guidebook is that if you get to the col and realise that you need to take the wet weather escape route, then you should have taken the Fedden route in the first place. Up at the col you do not have the information about the condition of the rivers, and by the time you do, at the end of a very long day, you don’t have the time to backtrack a couple of hours up the steep slope through the bogs (and the conditions underfoot were atrociously arduous) and then take the 10km walk out.

And in the event, the condition of the rivers hadn’t even been our problem. Our problem was the perfect storm of the footbridge being effectively not there. In the final analysis, it was a good thing that it hadn’t, because if we had made it to the end of that day we might well have been tempted to go on with our intended route into Glenn Affric.

The path we were on was not on the map so we were not entirely sure where it was going to take us. Initially it wound its way down the hillside past huge scoops of peat and soil planted up with mixed conifer and deciduous trees,

then down to a rarely-used but still faintly visible track up through mixed regen which was on the map and led to the few tiny hamlets on the south shore of Loch Garry.

Instead of the very purposeful problem-solving walking we had done in the second half of Monday, we were now noticing more and more what was around us. Down by the bridge of a hydro-dam a prehistoric forest and miniature was created by branched horsetails and tiny conifer saplings. 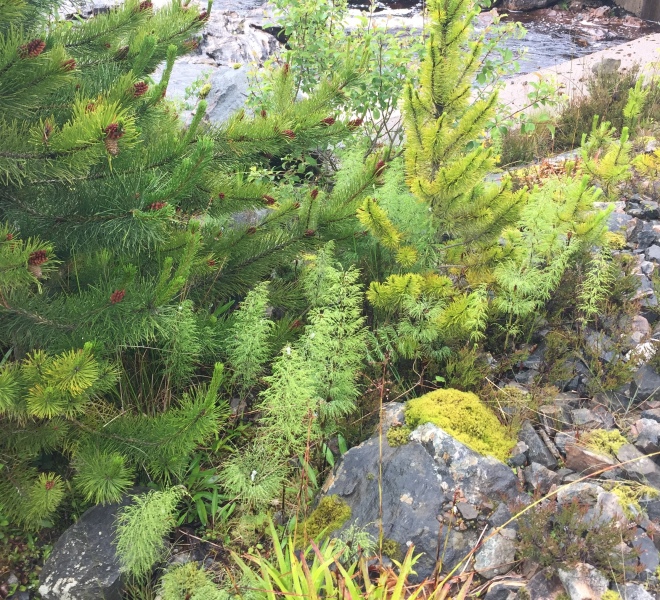 On the regen path we came across the Russian invader the Pine-tree lappet moth, the caterpillars of which (and the heather was infested with them up on the hillside) are devastating pine forests in Scotland.

Luckily this one was dead as a doornail – perhaps drowned in the apocalyptic rain?

Down in Garrygoualach a beautiful old steading was being restored, together with a stunning new-build, and what looked like a very high spec sweat lodge amongst the trees. We were back in the inhabited world.

Further on, the track met another which led swiftly to a bridge. A beautiful steel, sturdy bridge over the narrowest point of Loch Gary … and finally we had crossed to the North Shore.

Out of the bushes at the side of the track appeared David. We had been texting on the path, both to reassure him that we were okay, and to ask how his wet whether alternative route had gone on Tuesday. It had been a miserable. It was a sodden battle through peat hags, by the sound of it not much better than we had had ourselves, and he had not found anywhere suitable to camp until 11pm. He then simply pitched on the path itself in a plantation, it being comparatively flat.

We stood for a while on the minor road comparing notes and discussing our intentions. Our main objective was to get to Invergarry as soon as possible, to dry out the tent, and our boots, and begin the process of re-routing ourselves. We were therefore waiting for Cathy to come and pick us up in her taxi and convey us to the Glen Albyn Lodge B&B. (As our friend from Loch Tummel texted later that day, ‘a taxi? To be said in your best Lady Bracknell “a handbag?” voice). David’s intention was to walk 13 km along the road instead. As we were chatting the still air brought out the midges and we had occasion to give our midge headnets their first outing. A friend of our son, on seeing the photo, commented, what, are they bankrobbers?”

Glen Albyn Lodge was a corker of a B&B. Dennis and Helen have a fabulous place (business for sale if you are interested). It was built by a man called Norm to a very high standard by a group of master builders from Poland who were trying to impress. Dennis and Helen treated us to coffee from the Gaggia machine: luxury. I was in raptures over the underfloor heating and Stephen was over the moon about the space in the garage where we could hang out our soaking tent to dry. We spent some time resting in the conservatory reading Dennis’s brilliant verses, which include the sad story of Norm, the house, the Polish foreman … and Norm’s wife.

We had lunch at the Invergarry hotel, feeding ourselves up and buying a card of the very hillside where we had unexpectedly spent so much time. We used our last stamp to put it in its envelope and sent it back to ourselves at home as a memento. We scoured maps. Just as we were leaving, David arrived and ordered his customary pint, so we sat back down with him and explained our plans, and listened to his.

Back at the B&B, the day was crowned by being called down by Dennis for a huge treat: the sight of a pine marten on the red squirrel feeders.

There are several families of pine martens who regularly visit, morning and evening, when the red squirrels are not around. Dennis and Helen were warned on their arrival that the pine martens would take cats, and indeed the huge tree-climbing claws and sharp foxy jaws were to be respected. Dennis showed us video footage that he had shot that very morning of a mother and her three kits at the feeder. Our evening view was of a large male. From our room we could look down at the nuts, and there we saw a ‘wee, sleekit, cow’rin, tim’rous beastie’ scurrying round on the ground, picking up fragments of nuts left by the martens and the birds.