My hypothesis may indeed be unsound; but, whether or not, it is clear, taking organic remains as upon the whole a faithful chronicle, that the deposition of these limestone beds was coeval with the existence of the earliest, or all but the earliest, living creatures upon earth. – Richard Chambers, Vestiges of the Natural History of Creation (1844) 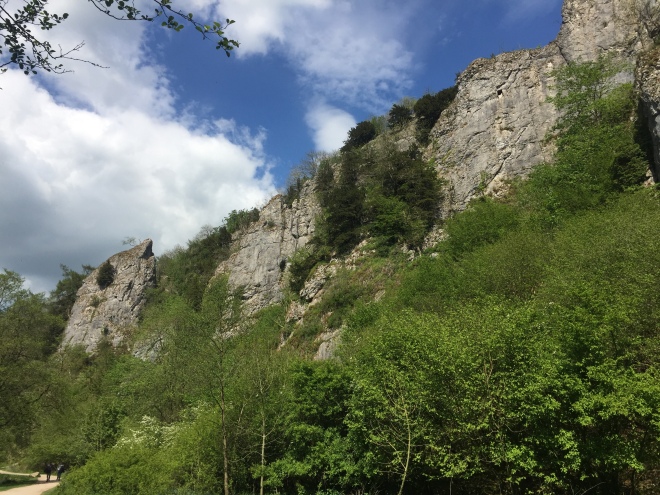 After yesterday’s horribleness, the trail was to gift us a happy day with plenty of things to see over its 30.6km length from Rocester to Newhaven, and some lovely walking underfoot. It started with fabulous porridge courtesy of Gilly, who gave us a short lift to the start of our walk in Rocester, home of JCB World Headquarters. There is evidence of the company’s input into the town not only with the large number of factories, but also with education and training institutions such as the JCB Academy. They are the town’s major employer.

The next couple of hours took us over meadowland. The grasses are now almost in flower, and we were grateful for our long trousers, since seeds down the socks are a major irritation. There was a fair amount of long swishy grass to wade through, 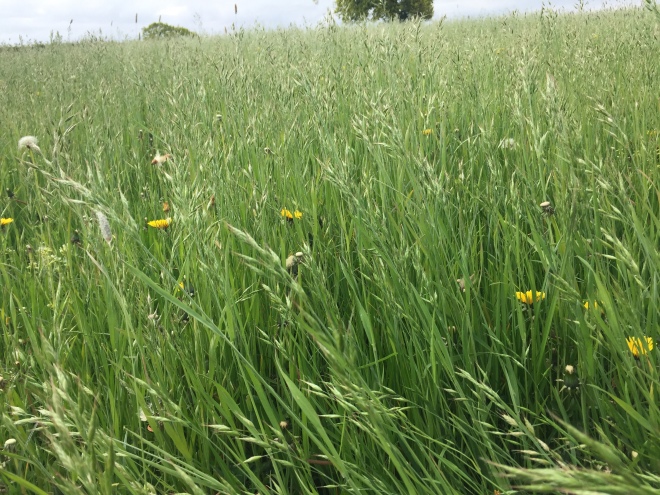 but the best of the meadows had a wide variety of species in them. The red clover in particular smelled delicious. 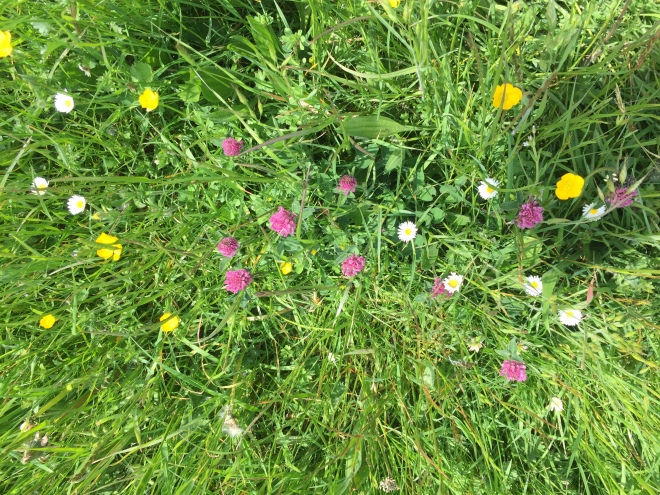 Stiles there were, but manageable today, in stark contrast with horrible Staffordshire. The local vernacular seemed in Derbyshire to be to flank stiles with shaped menhirs, with holly on one side and thorn on the other.

In one meadow we met Tom Davies, walking John O’Groats to Land’s End. It felt like a genuinely celebratory meeting: at the point we met in the middle of that field, between us we had walked the entire way. We exchanged experiences. Tom is walking to raise money for pancreatic cancer in memory of his father and is storming through the challenge. Go, Tom! He has only a month left, whereas we… have more. 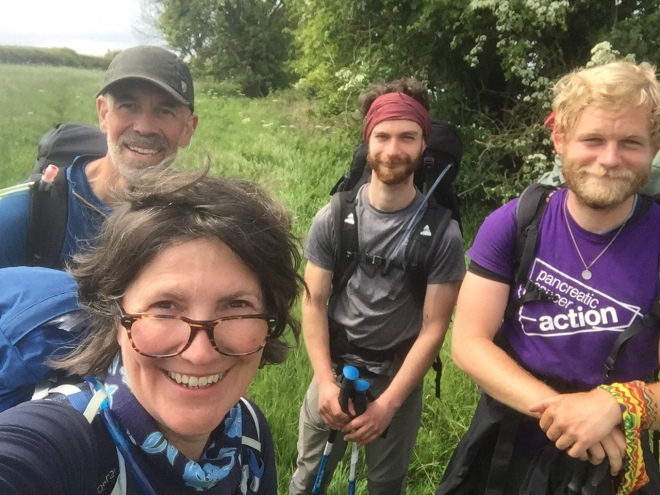 The meadows were interspersed with extraordinarily pretty villages. We were on the border where the underlying geology changes from sandstone to limestone to gritstone, and this was visible in the building stone: all three were used in Ellastone, for example, from this sandstone house 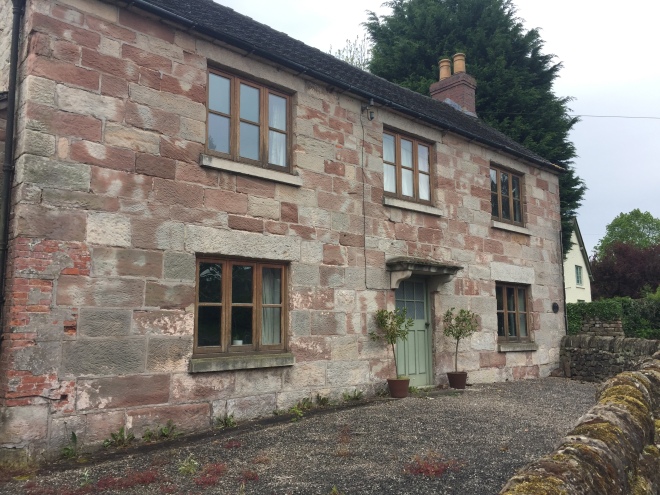 to this limestone wall

to this gritstone gatepost. As we walk north we will leave the limestone behind and it will be replaced with gritstone in a couple of days’ time. 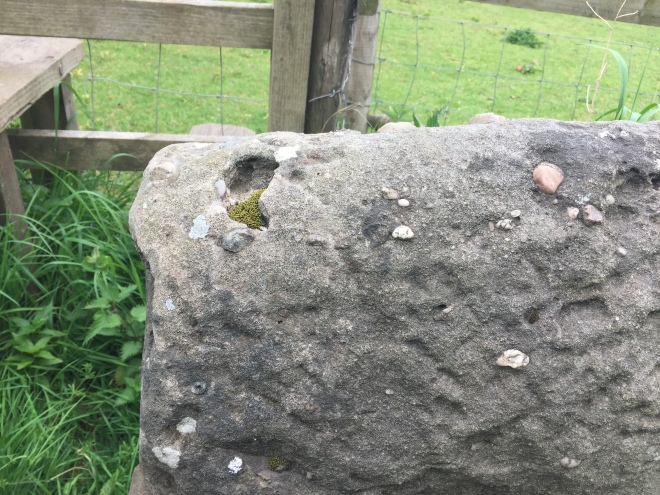 We felt the advent of millstone grit was a harbinger: we were on the verge of passing definitively into the north.

We walked with the River Dove most of the day as it wound south. In the morning, in its lower reaches, it cut a swathe through a wide valley where serious attempts were being made to control the invasive Himalayan balsam. As we moved north the river forms the boundary between Staffordshire and Derbyshire (how we were looking forward to leaving Staffordshire!) and signalled a dramatic change in landscape. 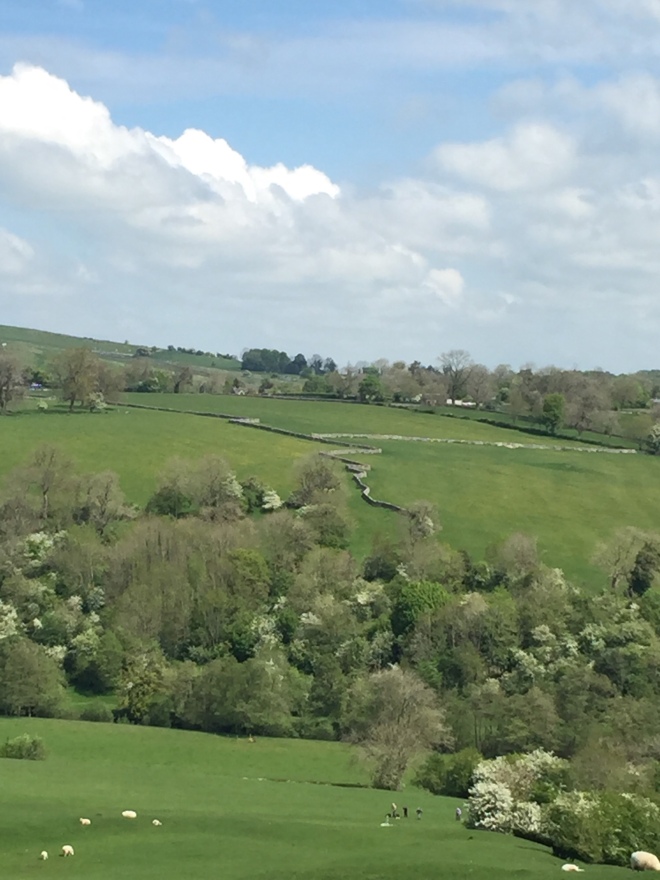 On the northern side rose the limestone hills through which the River Dove has cut a long, deep gorge. Dovedale, owned by the National Trust, has a million visitors a year, coming to admire the gorge, and at is foot the strikingly-shaped limestone hill Thorp Cloud. 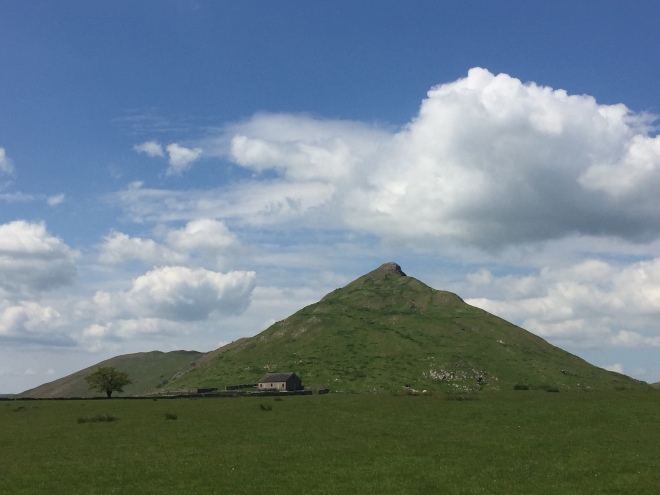 These visitors have worn the limestone posts at the side of the gates into Dovedale completely smooth. The difference between the limestone of Thorp Cloud and Dovedale behind it became clear: the latter was a reef formation and fossils are visible in the posts and on the slabs used to pave the path up the gorge. 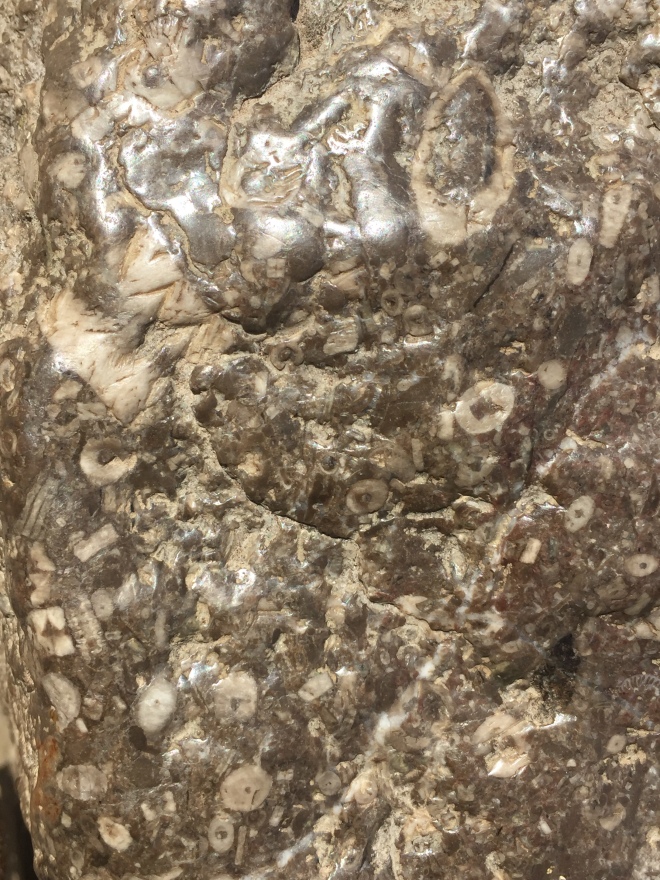 Once you get past the fleshpots of the lower reaches, where the crowds gather around the famous stepping stones, 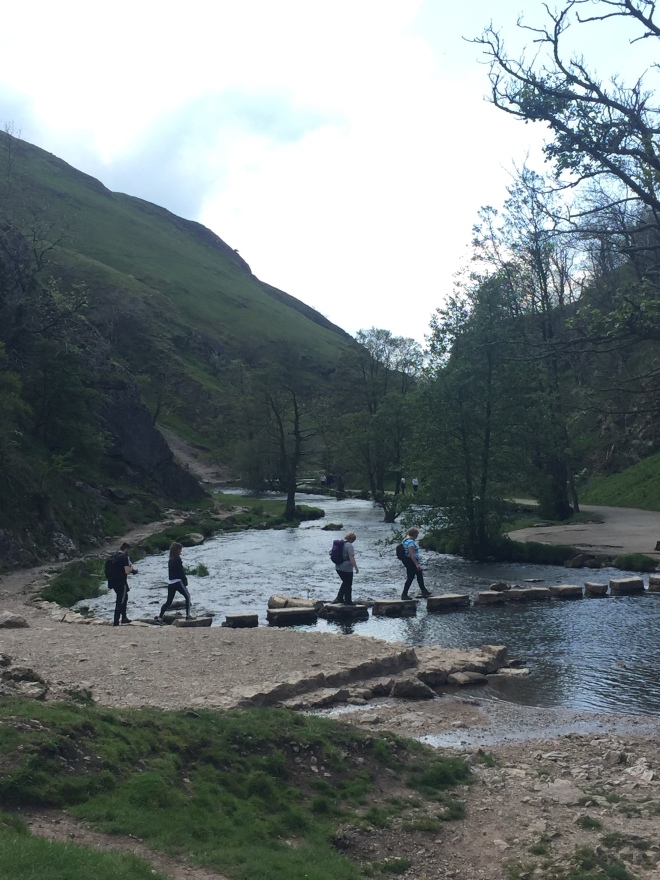 the Dove becomes a quiet, peaceful haven.  There were fewer people walking up, and the atmosphere was more contemplative. 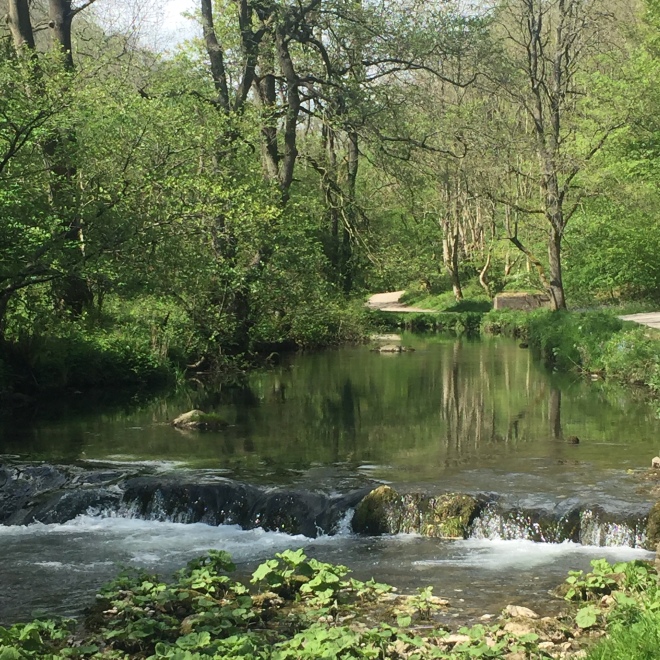 We gleaned from a pair of bird-watchers that there was a dipper nesting in a cave further up the valley, so we parked ourselves on a rock outside the mouth of her cave until she flew out under the boardwalk and sped away up the river, her characteristic white bib clearly visible. 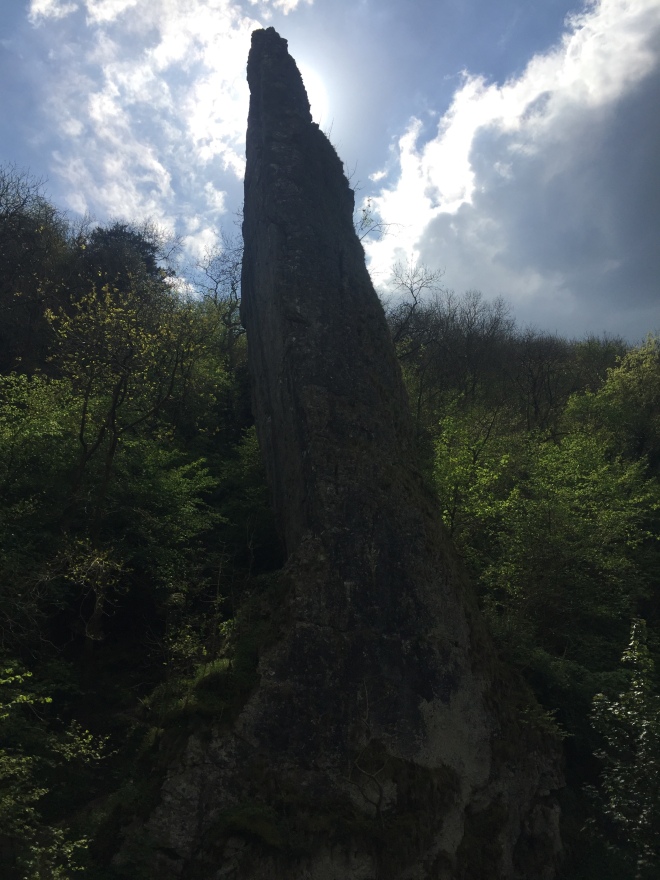 and the cave formations so typical of the limestone (Stephen is in this photo to provide scale!) 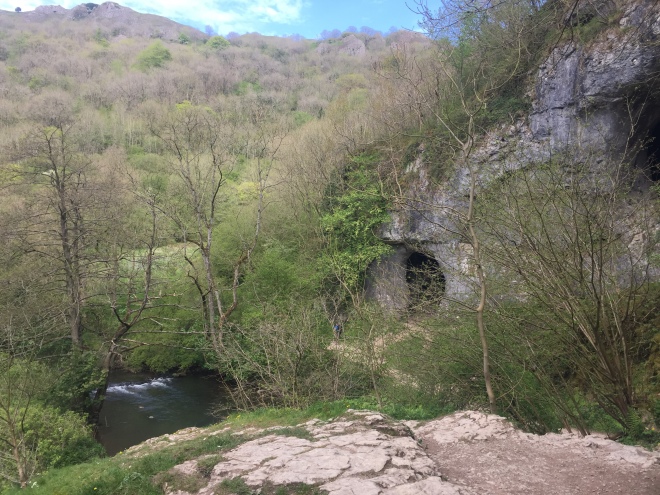 Milldale was a natural stopping off point, to treat ourselves to enormous locally-made ice cream, and to admire the plumage of one of the many local ducks. 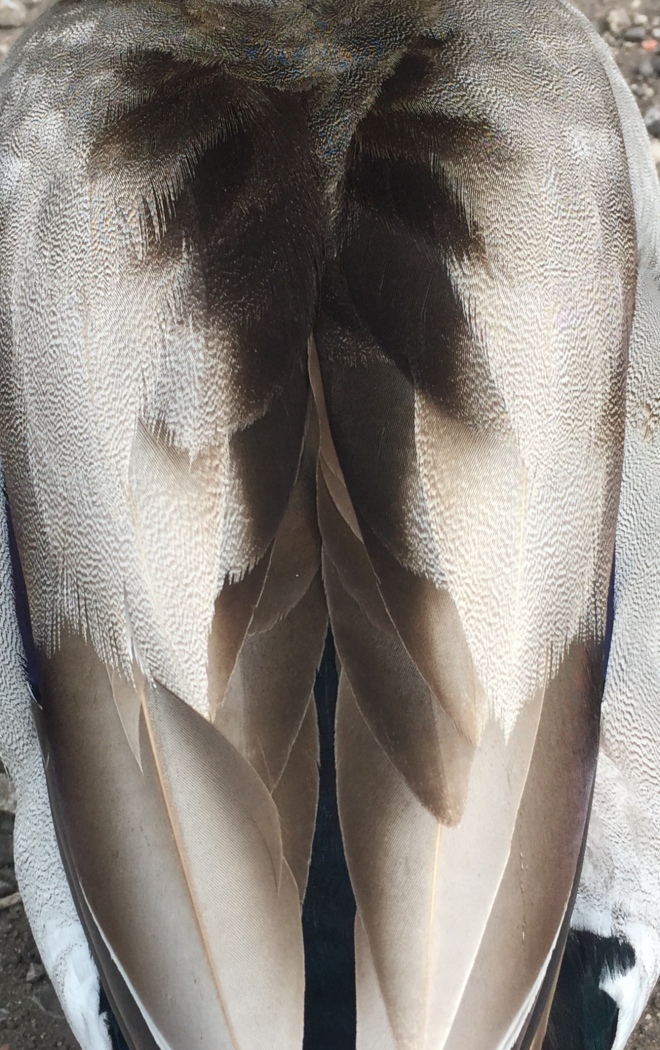 We were almost the only walkers north of Milldale, where rocky weirs have been constructed at regular intervals to create pools for the fish. Fly fishers were trying their luck, the ‘private fishing’ sign being completely ignored by heron, one of which we disturbed in the process of catching his supper). Tiny ducklings struggled against the faster currents, shepherded by their mothers to reach the safety of a patch of weed which would hold them and stop them being washed away downstream. A cockchafer beetle risked life and limb crossing the path in front of us. 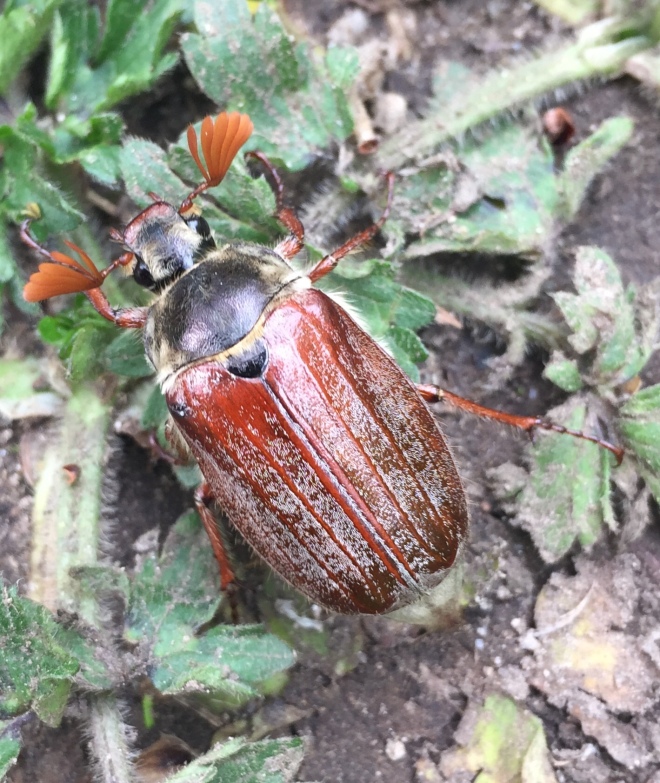 We took a dry side gully out of Dovedale, with steep hillsides covered in orchids and cowslips. 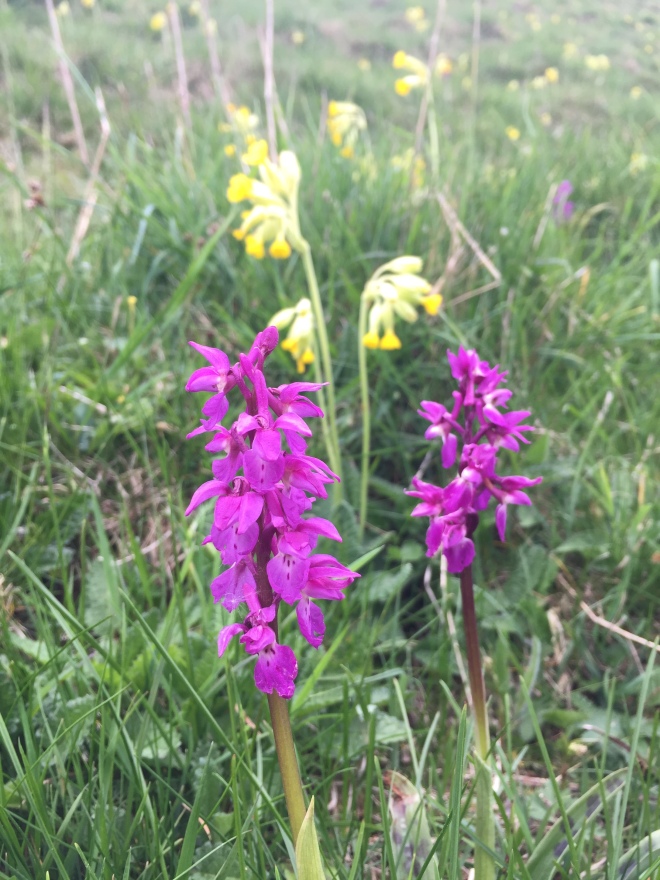 It brought us finally out of the dale to the Waterloo Inn and supper, before we covered the last half hour across fields to our campsite, where we pitched our tent in the failing light and hunkered down, expecting rain. 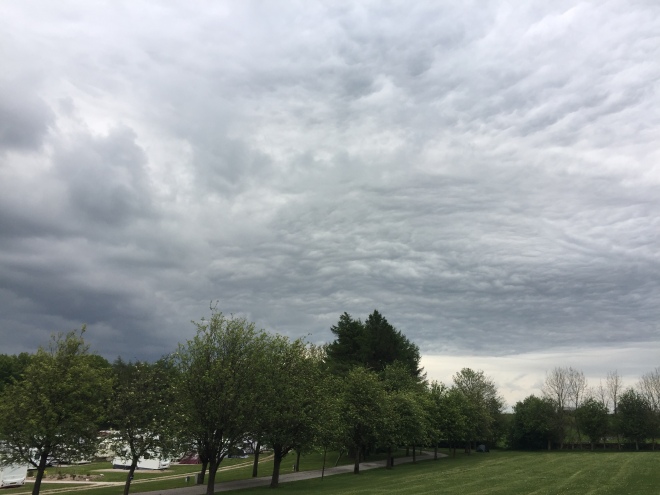 Derbyshire Stat for the Day

Number of proud landowners with £10,000 a year emerging from impromptu dips in their lake with troubled visages and wet shirts and britches: zero

One thought on “Dovedale: Decisively out of the Midlands”