The path here follows the edge of huge Prairie-like fields of crops, and it seems to take forever to get anywhere. It’s possibly the low point of the whole trail. – Andy Robinson, The End-to-End Trail

The 27km from Little Haywood to Rocester started well enough with a reprise of the canal towpath: beautiful at any time of day. At 9am all the narrowboats were on the move. We had several jolly conversations with the occupants about boat life, and watched a couple negotiate the locks. 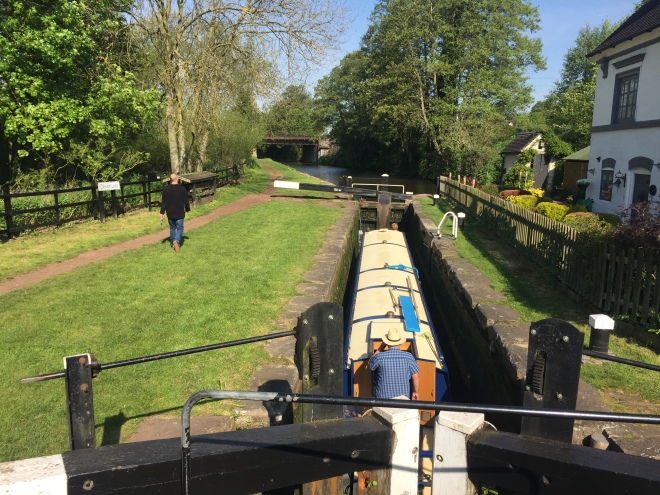 We bid a sad farewell to this flat grassy path at Rugeley, a confluence of road and rail which felt temporarily rather impactful in comparison with the timeless tranquillity of the towpath.

Thereafter the day went rapidly downhill – and stayed there. It was a perfect storm of the worst aspects of the Staffordshire Way: poor maintenance, infrequent signage but frequently inaccurate and buried in hedgerows. The fields were vast, endless and reminiscent of Stepford Wives: there was plenty of this: 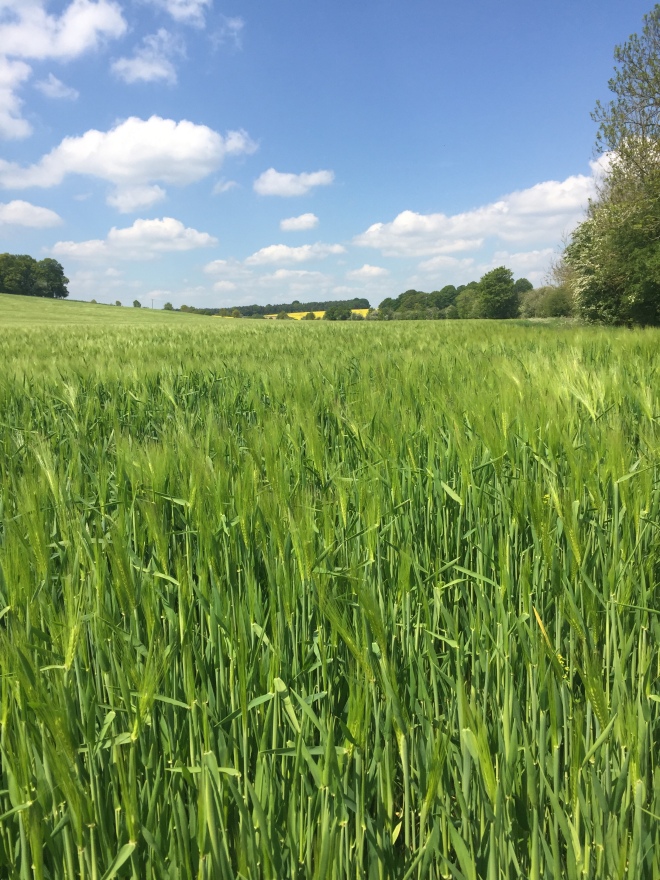 Field edges, although wide, were dusty and airless, and made uniformly uneven by tractor tyres. Route-finding slowed us down; conditions underfoot slowed us down further. Paths through woods petered out into impenetrable undergrowth. Fallen trees blocked the way. Uttoxeter was depressingly dilapidated.

The walking gods saved the worst till last: the passage of the A50. A thunderous road flying over a rat’s next of streams and rivers, at first visible on the distance beyond a field of extremely aggravated bullocks who all got menacingly to their feet as we approached the stile, and formed a phalanx. We decided not to approach them, but took a wide detour around a couple of other fields bringing us more or less to the A50 where we needed to locate an underpass.

There were several underpasses, each containing a stream, sans footbridge. The one we selected using the satellite geolocation had a distinct path, and led to a very low graffiti-covered tunnel (Stephen had to bend down to get through). On the other side the path first divided, then petered out into brambles and nettles. 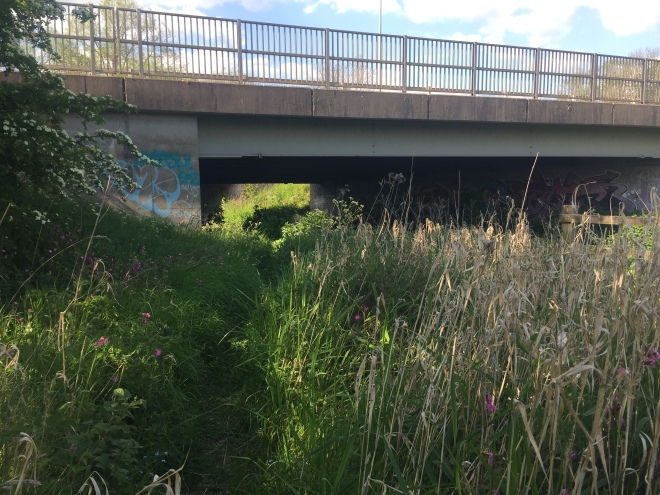 We tried to get through anyway, because we could see that on the other side there would be a way through the streams. But having climbed over a rickety fence covered in hawthorn we decided that this could not possibly be the Staffordshire Way, no matter how dilapidated and poorly-maintained it might be. So we retraced our steps. A couple of times. We absolutely could not see neither with paper map nor with maps on our phones, nor even with the satellite location turned on, how to get under the A50.

Eventually Stephen got the guidebook up on his phone and worked out that we had to access the underpass from a cycle route. But where was the cycle route? We asked a passing dog-walker. The geolocation had it absolutely right but the path we were looking for was above our heads: the cycle path was up on the A50 flyover.

The dog-walker didn’t know how we accessed the cycle path, however. We looked at the embankment and decided we were just going to go straight up it and over the fence at the top. Once there the cycle path was crystal clear, as was a ramp leading down and then back under an underpass. 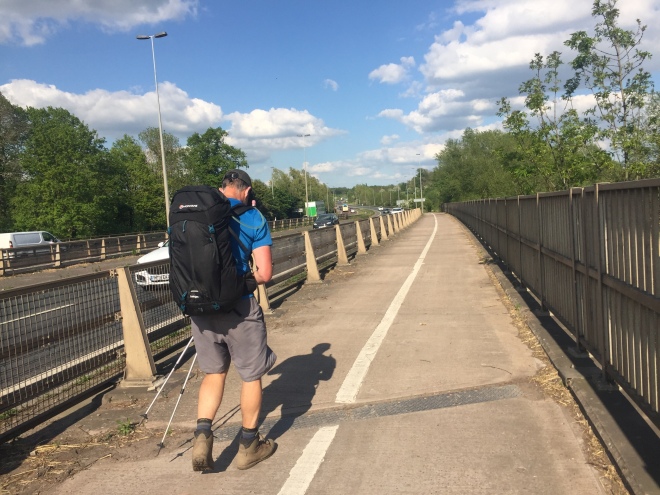 Here’s the Strava track of our movements trying to figure out where we were supposed to be going:

Eventually after about an hour of this we saw coming towards us our dear friend Susie and her friend Gilly who was going to put us up for the night. Gilly had Sweep on the lead: the most beautiful collie, with an innate gift as a therapy dog. The sight of all three was the absolute highlight of an otherwise hideous day. Gilly kindly provided tea, cake, baths, showers, gin, beer, and a delicious meal – and finally an enormous bed. It was like climbing into a cloud.

And there was another nice thing: I found this feather.

But apart from that, when we read the guidebook in the evening, we agreed heartily with Andrew Robinson’s assessment of this day, as summarised in the quotation at the head of this post: the low point of the route so far. Independently fact-checked.