After having been so down on Much Wenlock last night, we needed to divert into Much Wenlock town itself to get ourselves some breakfast. All of the negativity we had felt the night before evaporated: the town was as pretty as a jewel. Saint Milburga founded an Abbey here 1300 years ago and there have been communities living and working here ever since. The town centre is full of the most exquisitely-preserved ancient buildings. The Café on the square made Stephen the best cup of pep-up espresso, and in Cathy’s Bakery, its threshold step made from an old oak beam, Louise made us the most enormous and sustaining breakfast baps. It turns out that much Wenlock is definitely a place where we would like to return. How much Wenlock? Not quite enough! 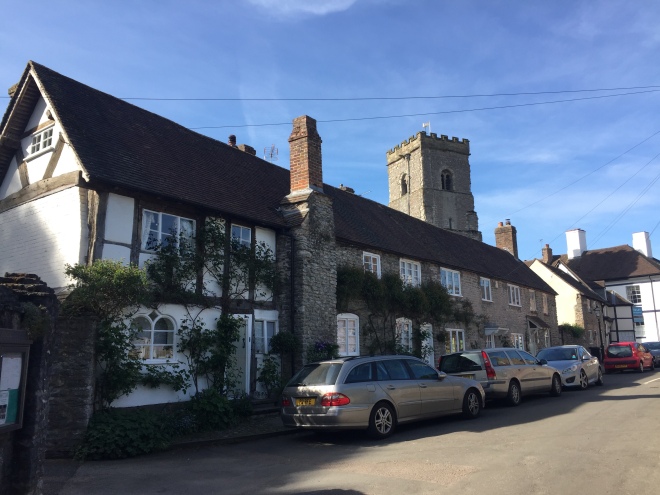 The footpath very quickly took us out into beautiful Shropshire Way countryside, past a gorgeous collection of farm buildings being restored and converted. 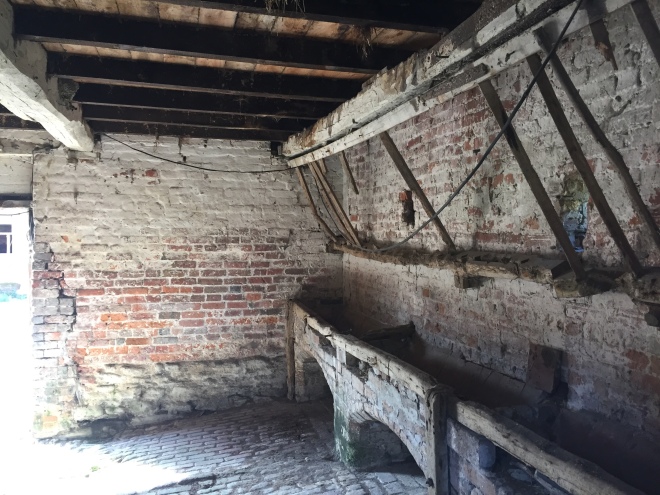 The first of the cow parsley was in flower in the hedges, Such a stark contrast to the delicate Queen Anne’s lace. 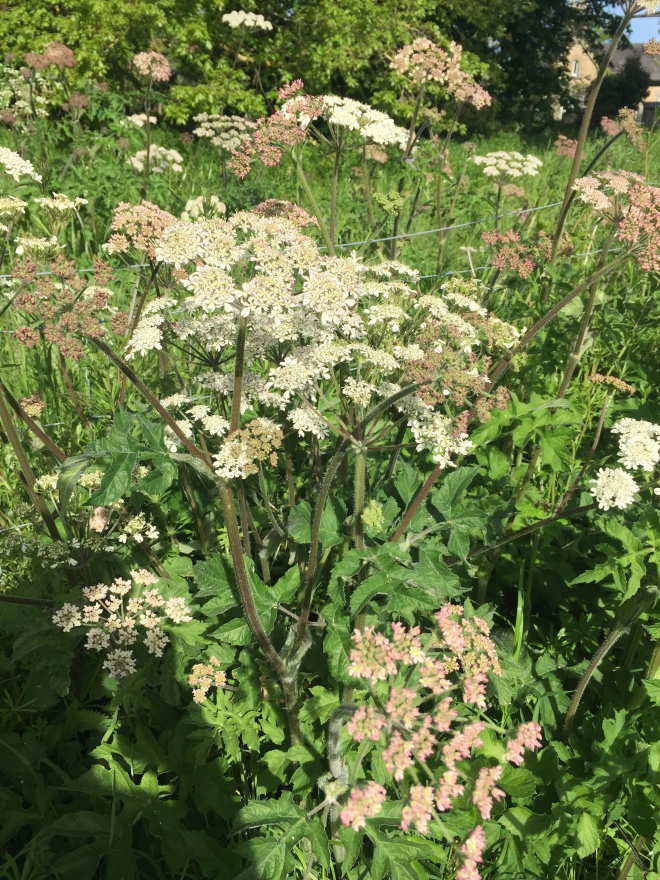 We even managed to find some fossils in a limestone wall, having failed to stop to explore the interesting quarries at the top end of Wenlock Edge the day before.

In the distance we could see the first evidence of a different kind of landscape: that of Coalbrook Dale, which had been at the centre of the very early stirrings of the Industrial Revolution in the mid-18th century.

I have been enjoying the wildflowers for three whole weeks, and this is Stephen’s time: he had been looking forward to getting into the landscape of the Industrial Revolution for ages, and as we got closer to the chimney and cooling towers he waxed lyrical about the ingenuity and creativity and problem-solving which characterised the British Industrial Revolution.

Stephen explained that the very earliest phases of the Revolution happened in rural settings, not urban ones. He had been fortunate enough to have had the eminent economic historian Maurice Beresford as a lecturer whilst at Leeds, and Beresford had taken Stephen out on several trips: Beresford himself did not drive, but he kept a car which he had insured for a succession of PhD students, and they had the use of it as long as they would drive him wherever he wanted to go. Stephen was invited to accompany them on excursions out into remote West Yorkshire Woodlands for example, to find limekilns and quarries and early smelting works buried and forgotten in amongst the undergrowth.

The path down into the Gorge took us past several of these kilns and smelting areas, and we wondered whether this could have been the track for trolleys to take the material down into the town. The other very visible sign of the changing landscape use were four enormous red brick cooling towers  from an extinct power station. It was an impressive and strangely beautiful piece of engineering. 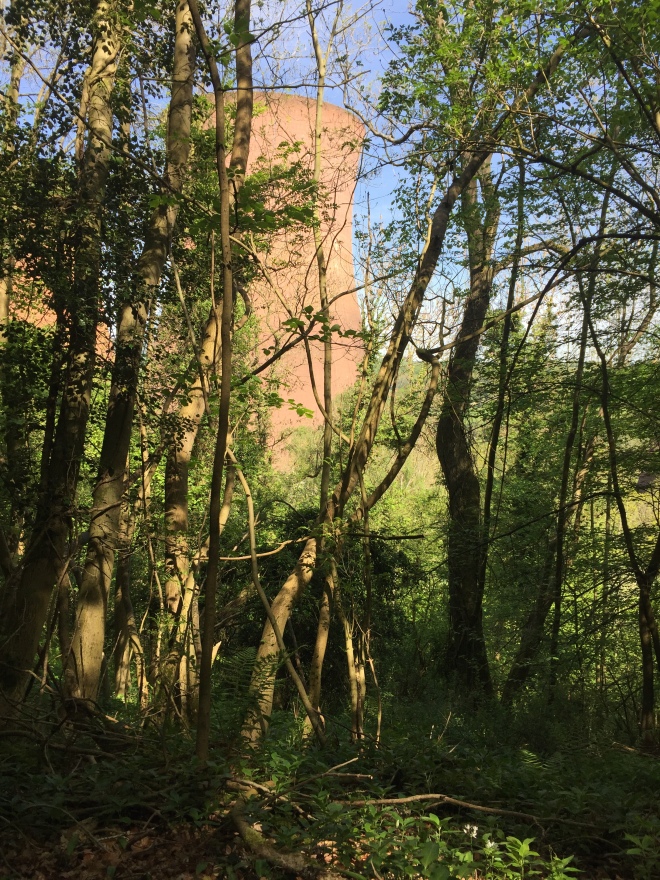 The Iron Bridge itself, the first major cast iron bridge in the world, was not constructed until human beings had invented the method of casting on a large scale. The bridge was built as advertising for the Coalbrookdale company, in 1781.

Further on down the river – we were back on the River Severn which we last left at Bristol – we walked past the Jackfield tileworks, now one of the many museums of the Industrial Revolution. The tileworkers’ church outside the works is a beautiful piece of showmanship. 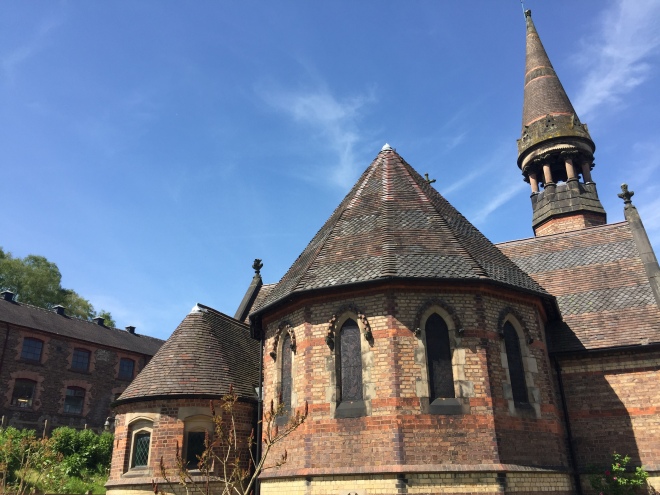 We crossed the river at another key point of interest in this extraordinary river valley: the Incline. The problem was to get barges from the river at the bottom of the valley to the canal at the top. It would’ve taken 27 locks to raise the water up to that point, so they designed a steam crane to lift the barges onto a boggingly-steep railway incline. At the top another crane posted them onto the canal boat. Ingenuity.

We were now on the Monarch Way, a frustratingly poorly-signed path through a golf course and out the other side onto miles of dead straight track. Since we’ll be crossing Wattling Street tomorrow morning we wondered whether this route tracked Roman roads.

Whilst this was quite boring walking, there was some interesting agriculture going on in the surrounding fields. There must be some kind of agricultural college around here, because a lot of the fields clearly had trial crops in strips or half-strips of field.

The day was also notable for crossing two of the only three A-roads we have crossed so far in three weeks’ walking, and one of these took us under the M54 motorway – a long, spookily thundering underpass.

When we arrived at our destination, we were immediately welcomed into the Bishopswood family. We stopped to chat with Malcolm, who offered to give us a lift out to our campsite, and Savanna in the Royal Oak (where they were not serving food), ordered us an Indian takeaway which we ate at her tables! Such kindness. What a lovely place to live!

Much Wenlock to Bishop’s Wood

2 thoughts on “From green and pleasant land to dark satanic mills?”