The world is round, so travellers tell,
And straight through reach the track,
Trudge on, trudge on, ’twill all be well,
The way will guide one back. – A E Housman, ‘A Shropshire Lad’ 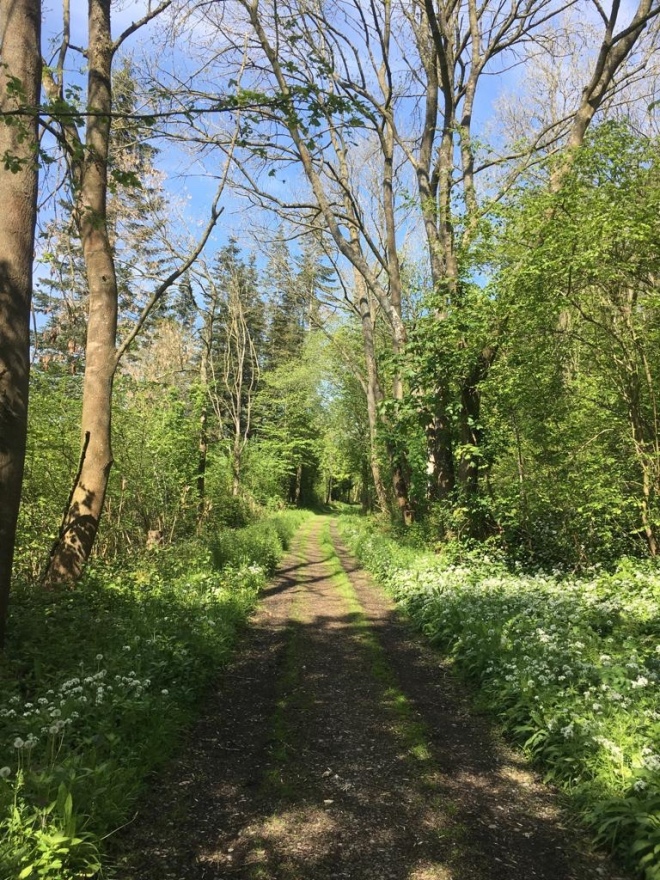 The payoff for an hour’s worth of road-walking to start today’s walk was the herd of beautiful Jersey cows at the end of it. They are a class above all the other cows we have met so far on this route – and there have been many. Jerseys are bewitchingly beautiful, and we were delighted.

After the Jersey beauties we came across a hare on the road on the track: Shropshire was shaping up to be something special.

An unpromising portal, a farm / mining dump, was the gateway to a place of literary magic and pilgrimage: Wenlock Edge. I had been looking forward to coming here even more than Tintern Abbey because it was new to me. Loved by A E Housman and Vaughan Williams, and loved of both our fathers, who grew up at the time when every schoolchild was taught to quote from Housman’s collection of poems ‘A Shropshire Lad’. Amongst the poems that Ralph Vaughan Williams set to music, was song XXXI, ‘On Wenlock Edge’. It is a place I had never visited before, but the name has always exerted a pull, and promised enchantment. I was really looking forward to laying down my own memories of the ‘blue remembered hills’.

Wenlock Edge is an 18-mile long limestone and clay-bearing escarpment thrust up through surrounding mudstone sandstone and shale. It was formed as a coral reef underneath a warm, shallow sea, and is very famous for the limestone quarries which are highly fossiliferous. I had imagined that it would be an open hillside like Hergest Ridge, or Stanage Edge. I was surprised to find that the full length of the escarpment was entirely wooded.

Initially we appreciated the woodland setting. But we soon realised that there were to be no views: we were walking on The Shropshire Way, a dead straight and closed woodland path, for the entire day.

The monotony was horrible. One thing we have really appreciated on this walk has been variety, but today there was almost nothing in the way of different things to look at. Because it is the rule, the last section was the worst. A shame, because it was also on paper the most interesting: at the northern end lie the limestone quarries for which the Edge is so famous and where one can look for coral reef fossils, but by the time we got there between 4 and 5 o’clock, we had lost the will to live. The clay-bearing rocks which interbed with the limestone had formed the usual hard-baked clay soil, and this was combined with limestone cobbles to make a really unpleasant walking surface. ‘Trudge on, trudge on’, as Housman put it.

We even had to put on the Peter May audiobook to distract ourselves from the dreariness. We also looked up Jack Mytton because at times the Shropshire way runs together with another path named after him. It turns out he was a rake of the Regency period who bribed his way into Parliament, didn’t much fancy it because he was a lazy, lazy man, and thereafter lead a life of gambling and dissipation. His second wife ran away, and he eventually did too, to escape his creditors. He died in prison at the age of 37. Why Shropshire would want to memorialise such an unillustrious son of the county with a named footpath is beyond us.

In the whole walk along the Edge our tally of interesting things was:

And apart from that it was 27km and hours and hours of just this:

So when we got in to the peaceful, well-kept Sytche campsite (such an odd name. I wonder what its origins are?) we cheered ourselves up by calculating this startling fact:

And that was the end of our bucolic aspirations for now: tomorrow’s walk takes us through the landscape of the early Industrial Revolution, Ironbridge, and Coalbrookdale.

Craven Arms to Much Wenlock

2 thoughts on “On Wenlock Edge”