… The north polar star, which keeps its place, and all the stars turn towards it. – Confucius

In his book The End-to-End Trail, Andy Robinson comments that the section from the Somerset Levels through Bristol over the M48 motorway bridge and into Chepstow, two days’ walking for us, contains the highest amount of road walking of the whole Land’s End to John O’Groats route. 23% of the section is on roads and this does not include all the other rocky bridleways and tracks. The two long days’ walking and the tramp over the roads of the virtually-footpathless Levels took a toll on the bones of my feet, and after the Levels day on Saturday (a word which has almost no meaning in our lives at the moment, but which might serve to orient you) I was anxious about developing a stress fracture in my heel which would kibosh the whole trip. We sought advice from our expert strength and conditioning coach Simon Woodward and as a consequence decided to cut down the day from Cheddar to Easton-in-Gordano by a third, from 32 to 23km, and take a rest day (the bank holiday!) instead of walking from Easton-in Gordano through Bristol, over the bridge and into Chepstow. We will start again in Chepstow on Tuesday morning.

All this we cogitated while assaying the walk from Cheddar to Easton (planning on bailing out at some point in the day), and I took extra care to place my feet to avoid rolling my ankle inwards on the heel strike. We think we need to pay more attention to placing feet particularly at the end of a day, because the last hour or two always seems to be a slog along a road, and we are tired and not concentrating sufficiently on how we are walking.

The weather was simply glorious and we were keen to get up onto the top of the Mendips which had been drawing nearer and nearer over the Levels. The stiff pull up onto the top by the Gorge was a good way to stretch our muscles, and the clarity of the air and the expansive views from the top more than repaid the effort. We could see the whole curve of Bridgewater Bay where Bristol Channel widens out, all the way out to Hinckley Point to the west, and Glastonbury Tor to the East. It was good to be high up once more on open land with fresh air, perspective and amplitude.

The skylarks were back with us, and the slash of the Gorge was a striking feature. The limestone is so different to walk on than the mudstone of Cheddar and the tidal silt of the Levels. Some of the stones of the path had become highly polished and were very slippery – we were glad we were not walking in the rain. A strange oddity about the understory of the wood on the way up was that nothing grew underneath the trees, but there were no fallen leaves either. It looked for all the world as though someone had been “raking the forest floor” in allegedly Icelandic fashion. On the top grazed herds of brown goats (“They won’t give you healthy respect like cows”, said my cattle expert. “They’ll eat anything. Watch out for your walking poles.”)

The warren of paths around Black Down and Burrington Combe were crowded with large groups of ramblers, cyclists, dog walkers and other members of the public enjoying the outdoor space. We appreciated some traditional dry stone walling going on at the top of the Gorge, and thought fondly of my father, and when we got down into Burrington we appreciated yet another beautiful North Somerset Gothic church: it is almost as though each village was trying to outdo the others with delicate Gothic tracery. We thought fondly there of Stephen’s father.

Having had our fill of the southern perspective, we bid farewell to the views back over Somerset and into Devon and turned our faces to the splendid views North. Bristol awaits, then the Channel, and the crossing over into Wales. Cornwall is a distant memory.

On the map there is a clearly-marked footpath along Copthorn Lane leading from Burrington almost to Wrington. By the time we were a couple of hundred metres in and were committed, we realised that it was going to be a stiff fight through undergrowth for the entirety of the progressively-overgrown kilometre, every step of the way beating with our walking poles at the thick weedy growth of nettles, cow parsley, long grass and trammelling goosegrass, getting stung even through our trousers. We disturbed a roe deer a little ahead of us; she looked back at us over her shoulder, then leaped nimbly away down the lane. We found the place where she had slept, a flattened section of the grass and nettles.

At last we were out, sweaty and swearing, only to find ourselves struggling along the verge of the terrifyingly busy A38. The turn-off towards Wrington brought a welcome Magnum ice cream and a packet of crisps. Thus fortified (but sad that our dear friends who live in Wrington were away for the weekend) we carried on up the hill, noting that a sign we are moving from spring into early summer is the first truly dappled shade we have seen yet.

Onwards and upwards, the wood meets the end of the Bristol Airport runway, from which planes took off seemingly just feet over our heads. 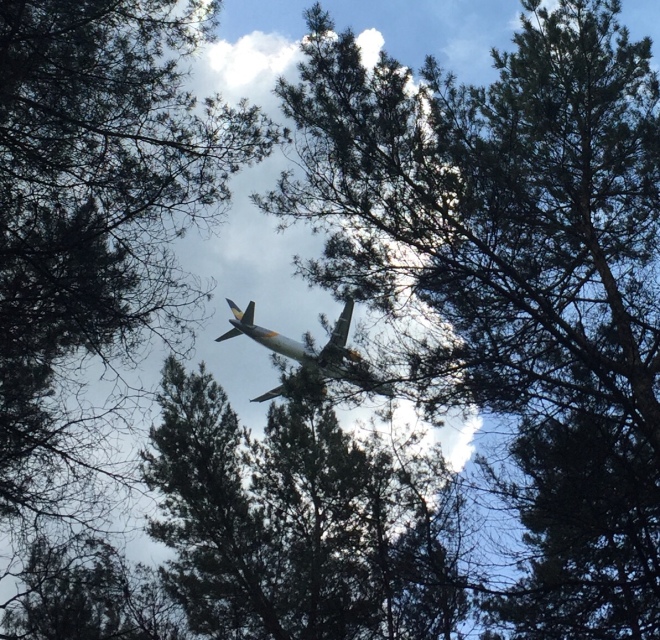 By the end of the wood my heel was more than ready to call it a day, and we arranged for a lift out of Backwell Green. How comforting to see to smiling figures heartily welcoming us! 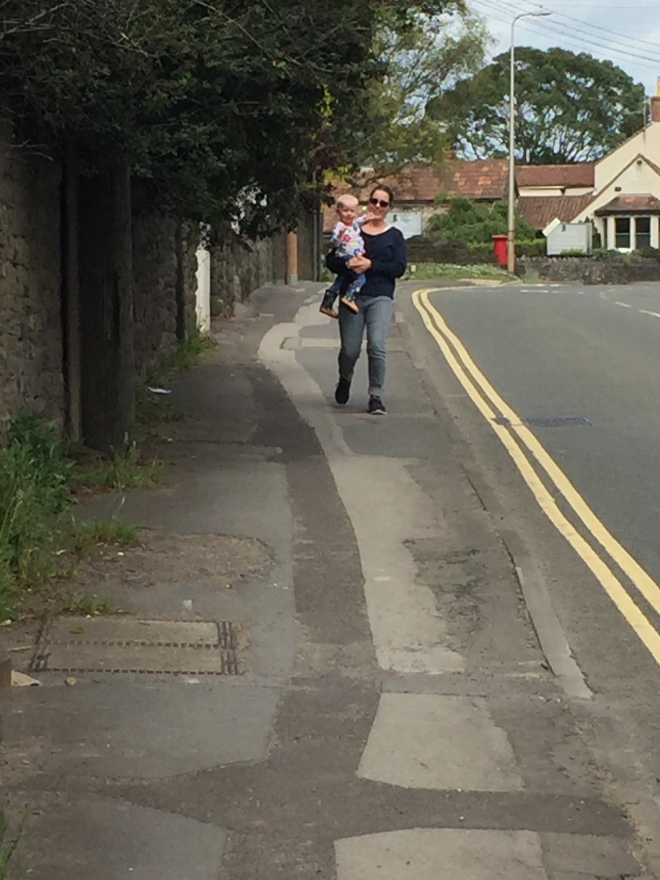 We are blessed to have so many friends and family supporting us on this journey. Bryony and Richard washed our clothes and provided aromatherapy foot spas, an enchanting baby to play with, a comfy bed and The Most Spectacularly Enormous Chicken Pie. And the breakfast this morning rivalled the best of the B&Bs (no other has offered Patum Peperium!) 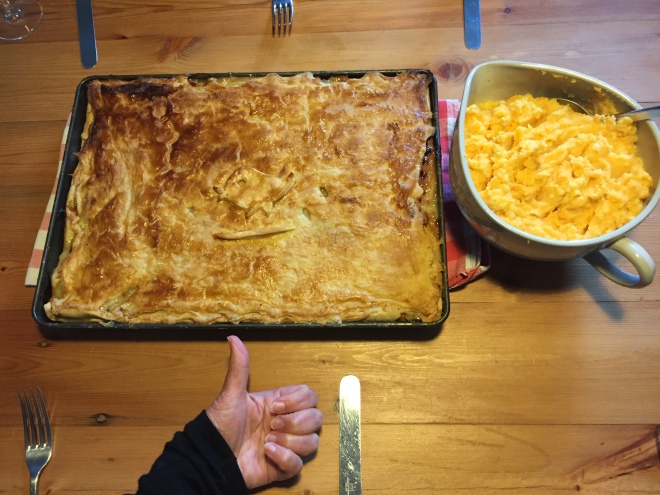 Stats for the Day from the Animal Kingdom:

Herons on roofs of bungalows: 1

Animal noises made whilst reading book to small child: the full array, including fish

Fly-through with photos and elevation:

10 thoughts on “Farewell to the South”