With feet partially recovered from the ordeal of the last two days, we took a taxi to Cossington, cutting out 10km of roadwalking through the old market town of Bridgewater, its ancient deepwater port now silted up. The taxi driver remembers big ships in Bridgewater when he was a boy, and you may recall the significant flooding for months on end in Somerset in the winter of 2013-14, and the ensuing discussion about how years of insufficient dredging of the drains had increased the flood risk. I had thought that the man-made drains were an irrigation system, but of course much of this land is below sea level, and the drains are in fact just that: to drain excess water off the fields. We passed the site of ancient Roman saltworks, indicating that this land, before it was drained for its rich agricultural potential, was subject to frequent saltwater inundations.

Drains edge nearly every field. Many are cleared, the silt dredged up and spread along the banks,

but others are choked with vegetation: reeds, iris, willow and Equisetum, a Paleozoic ‘living fossil’ (visually similar but entirely unrelated to mare’s-tail), the nodal spacing pattern of which inspired John Napier to invent logarithms.

This land is sparsely populated, and rich in wildlife. We startled two ducks as we peered into a drain, and later saw a fat, well-fed fox slinking along the side of a hedge. Coots paddled into the safety of the reedbeds as we passed. Swans glided solitarily along the wider drains, and we saw others in the distance in a cluster. A pair flew overhead, honking loudly.

I had been hoping to see some of the cranes which have been re-introduced into this area, and I think I saw one very early on, flying above the reedbeds and drains looking for a good spot to land. It was at a distance, and I could have done with some binoculars to make a positive ID, but it was very different to the two swans we saw flying.

The walking was fast and always straight. There are few footpaths over the agricultural land – a shame since it meant that of necessity we had to walk along roads, crabbing towards Cheddar, the day’s end.

The visual marker was the Gorge, a striking gash in the Mendips visible on the other side of the Levels, drawing closer and closer throughout the day. In the far distance in the other direction, Glastonbury Tor was another landmark.

The good thing about walking on the road was that route finding was unproblematic, and conditions underfoot did not need to command the attention. Because we were both feeling grateful and relieved to have engineered a more restful day’s walking, we were determined to enjoy it.

We were able to keep our heads up and looking around and we found that we had more mental space for conversation since we were not preoccupied with the route and with the uneven path. We mostly discussed the local elections, the heroism of Tony Robinson, and a fund of entertaining anecdotes of Stephen’s summer jobs working on a dairy farm. Of course the landscape that we were walking through also provided endless material to talk about…

It seemed extraordinary that two days ago we were on the top of Exmoor, and this landscape could not possibly have been more different. As flat as you like, water all around, and the biggest, uninterrupted skies. 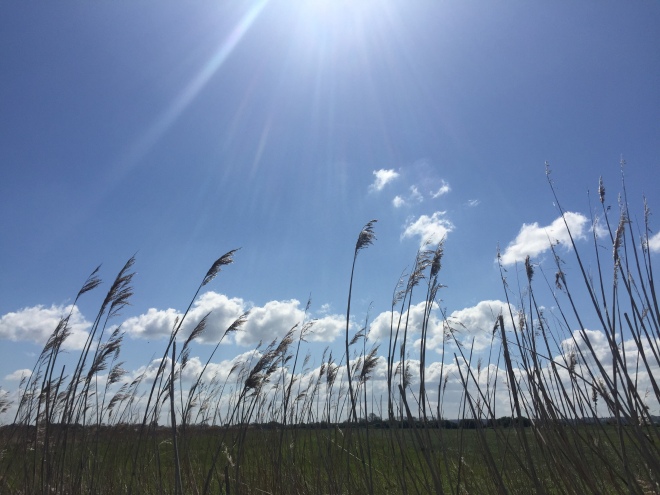 On the other side of the hills in front of us lies Bristol, at the end of tomorrow’s walk. We seem to be covering ground so quickly.

Once we started walking across farmland route-finding and conditions underfoot both became more taxing. Thick wavy grass à la We’re Going on a Bear Hunt provided a terrific banquet for swallows but was slow to wade through, and newly ploughed fields were rough too.

We stopped for a long lunch in Blackford, almost entirely built and still funded by the benevolent trust of the gloriously-named Hugh Sexey, Exchequer auditor to Queen Elizabeth I and James I. Jolly conversations with local Dom about mutual long distance route travelling and hearing about his son’s music passed the time all too effectively and perhaps lulled us into a false sense of security: after lunch we were slowed down significantly by two Close Encounters of the Herd Kind. The first skirmish was with a frisky set of Holstein bullocks, just of the wrong age (according to my cattle expert), who followed us from open field to open field and clearly had a bit of jolly post-prandial stampeding in mind. Extravagant gesturing with walking poles plus confident sound effects won the day. The second standoff went to the bull and his harem, and we backtracked a ways and took a different footpath.

The next encounter was less alarming: a weekend convention of metal detectorists, camping in a farmer’s field, had free rein to search in the surrounding fields.

One couple showed us a Saxon find, a 7th century decorative fastening. Exhilarating to think we were the third and fourth people to see it in 1400 years, since the Levels first began to be drained by monks from Glastonbury.

It was only 23km today – a blessed relief, and almost a rest day. Elevation was risibly minimal. We enjoyed the Levels, and I hope my feet are rested enough for a 30km day tomorrow. Bristol is just over the horizon, and we should be in Wales in two days’ time.

3 thoughts on “Waterland and Big Skies”