At Zennor one sees infinite Atlantic, all peacock-mingled colours, and the gorse is sunshine itself, already – D H Lawrence, letter to Katherine Mansfield and James Murray, Feb 1916.

Anyone who has booked a holiday over this Easter weekend is frankly hugging themselves this evening. A new national record has been set for Easter weekend temperatures, and we unexpectedly needed to break out the suncream for our first proper walk today.

The Inn was shortstaffed this morning for breakfast (‘funny how the staff get ill as soon as the weather gets good in Cornwall’), and we ended up leaving an hour and 20 minutes later than we had hoped. Which simply meant that we had more full sunshine to enjoy for today’s route from Sennen Cove to Zennor.

Lawrence’s description of ‘peacock-mingled colours’ was absolutely on the nail. Headland followed headland to reveal tiny zawns with palest yellow sand, blinding white breaking waves, and the sea in jewel-like shades of turquoise fading to darker blue. I’m with Lawrence: more beautiful even than the Mediterranean Sea. The peacock colours were set off by unbelievably bright gorse in full yellow bloom (I have always thought the flowers smelt enticingly of piña colada), or rust-red lichens covering towering cathedrals and towers of local granitic rock. 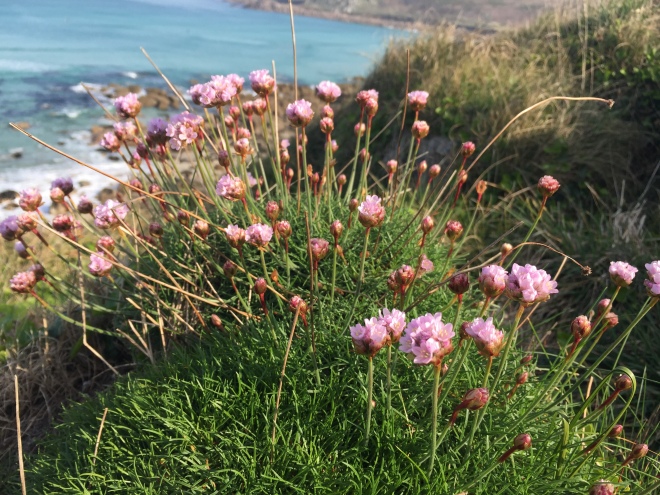 I’m afraid I got to document some of the characteristic wildflowers we saw: that quintessential coastal wildflower, thrift, bladder campion, tiny blue spring squills and ubiquitous drifts of the Cornish form of wild garlic (which doesn’t look as appetising as the Herefordshire one.)

Something else which wasn’t appetising was sea cabbage, supposedly the ancestor of all our brassicas, and itself edible. Supposedly.

We saw a few early butterflies: a small tortoiseshell, and a small copper. But I think it’s mostly too early for them yet.

We also met some nice people, mostly locals. Like the man who was photographing a pair of kestrels, nesting for the second year running in one of the abandoned tin mines which is such a particular feature of this part of the Cornish coast. We saw the kestrels, but sadly Ross Poldark was nowhere in evidence. The birdwatcher also pointed out choughs, and told us where the ravens were nesting in their 2 foot high rough assemblage of bleached sticks which looked like piles of bones.

The gorse, he said, was “bristling with adders”, and showed us pictures of some that he had managed to photograph in the early morning when they are still cold and slow moving.

We had calculated that the walk was just over 22 km long; a nice shortish day to start with. But when we had finished the GPS showed that we had done 26 km. This was exactly what I had imagined when doing the mapping: as you map in ever more detail, the route lengthens. We had climbed 880 m and done 650 m of descent: fairly standard for a coastal route, and I was pleased that my knees didn’t hurt at all (thank you for the Strength and Conditioning Simon Woodward – it worked! Thank you for the Pilates Liz, and Aidan!)

Mind you, it was also exhausting. We landed entirely on our feet with the fabulous Sue at Tregeraint House B&B: She gave us such a warm welcome, and after a fantastic shower and some stretching we felt human enough to assay the walk to Zennor for some supper. But Sue (what a darling) gave us a lift there AND back.

Today’s fly-through with photos and elevation

Land’s End to a Sennen Cove

3 thoughts on “Cornwall gets out the bunting”