All experience is an arch, wherethrough Gleams the untravelled world, whose margin fades For ever and for ever when I move. – Tennyson, ‘Ulysses’

Land’s End is well named. It was not only a journey of nearly twelve hours by public transport from comfortably-in-the-middle and decidedly land-locked Herefordshire, but as the improbably double-decker bus flung us down twisting narrow lanes banked with Cornish hedges and gorse already in flower, we got the distinct impression that we were indeed travelling right to the end of the world.

And then built onto the cliff top is the legendarily Vegas-like Land’s End Visitor Experience, complete with pedimented and columned Grecian entrance, and the famous signpost beyond the complex of buildings. The obligatory photograph felt surprisingly portentous.

And beyond that… well, out westwards lies the Longships lighthouse warning of treacherous rocks, and beyond it stretch more than three thousand miles of sea before you reach the coast of America.

We turned our backs on the west and headed north, taking the direction indicated by the other fingerpost, the one pointing to John O’Groats, rather further away (using the route we have chosen) than the advertised 874 miles. 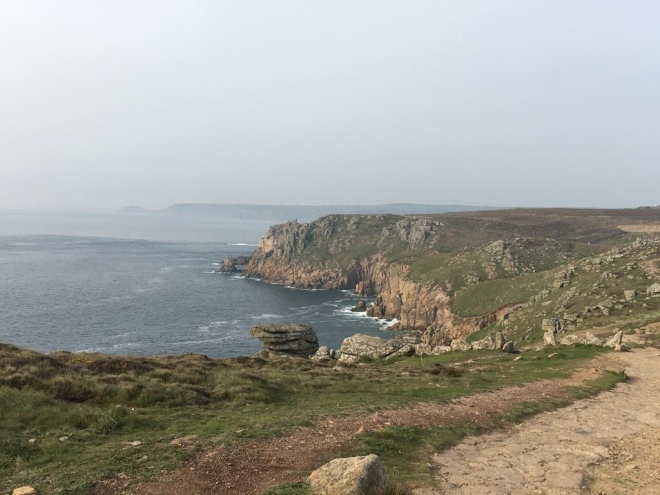 And the rocky path in front of us to Sennen Cove really did gleam in the early evening sun, illuminating that untravelled world which we will step into tomorrow, fortified by fish and chips at the Old Success Inn, where we celebrated having notched up the first 2.5km.

6 thoughts on “The Odyssey Begins”