But, if the canals are left to the mercies of economists and scientific planners, before many years are past the last of them will become a weedy stagnant ditch, and the bright boats will rot at the wharves, to live on only in old men’s memories. – L T C Rolt, Narrowboat

The Union Canal was built in 1821, unfortunately just before the railway arrived, running parallel to it and rendering it immediately obsolete. Retired teacher Rory whom we met walking his spaniels, and chatting to whom enlivenened half an hour on the towpath, told us that the canal was nevertheless used to transport coal into Auld Reekie and to transport Edinburgh’s horse manure out. The canal for many years had been choked up and impassable, but the Millennium Commission chose it as one of its projects, funding its dredging and clearing, making it navigable and rebuilding the towpath.

The canal is lined with meadowsweet, not yet in flower, and reeds, but there are also patches of cranesbill, the odd orchid and clumps of yellow flag iris. Water hawthorn and other oxygenating plants are helping to keep the canal water clean. 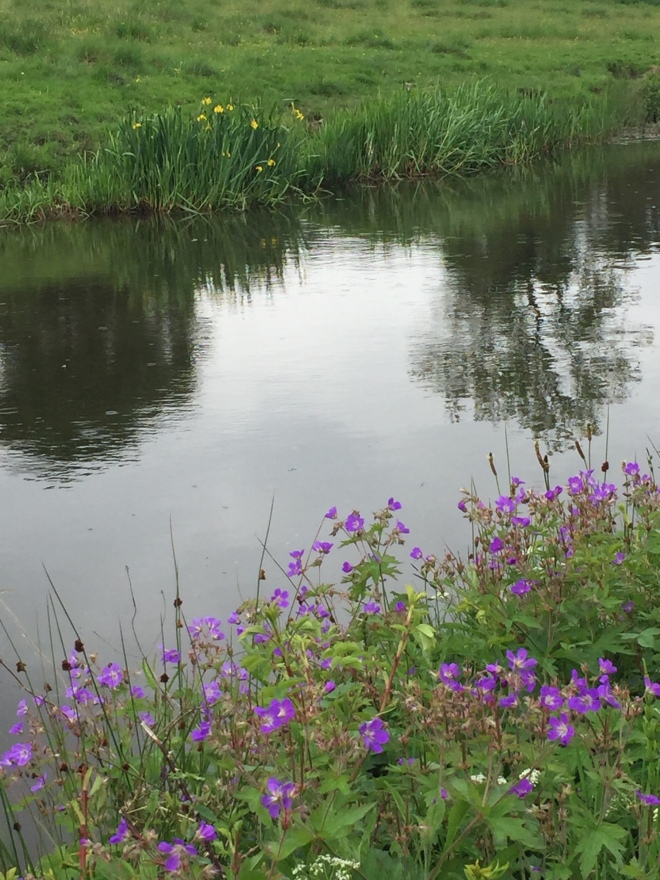 As the air warmed up we saw several damselflies, and the swans and ducks were out parading their chicks. We were flabbergasted that it was not raining, as the forecast all week for today had been appalling, but we began the day walking in T-shirts and walking trousers, and our full wet weather gear stayed untouched in our packs.

From Philipstoun it is an hour’s walk to the ancient seat of Linlithgow, in the Palace of which Mary Queen of Scots was born. 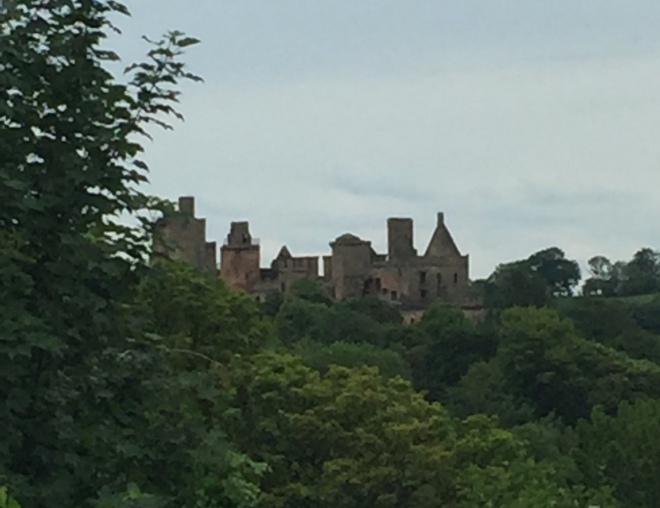 Linlithgow is, bizarrely, the largest urban centre this whole route passes, second only to Bristol. What a feat of rural stitchwork Andy Robinson achieved in designing this path which we are loosely following. Although we saw almost no narrowboats along today’s section of the path, a couple of the few we did see had an extraordinarily imaginative and extensive container garden – a real labour of love.

After Linlithgow, the canal passes over an aqueduct designed by Hugh Baird (with Thomas Telford as advisor), at 247m, the second longest in Britain. The canal narrows to carry the water in a cast iron trough over twelve hollow arches. 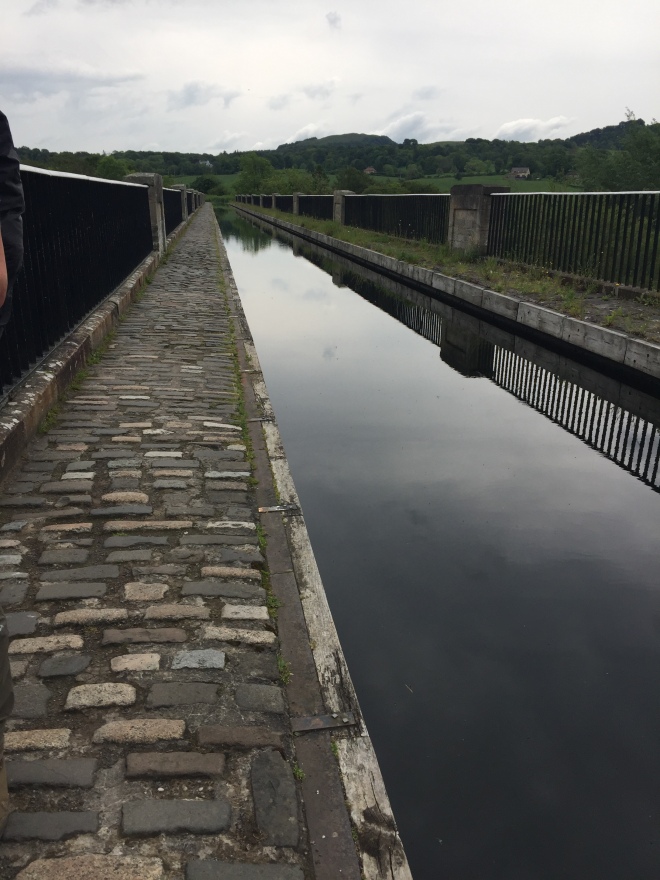 The cobbles and the railings as well as the narrow ribbon of water were quite dizzying to walk over, so I nearly missed the view of the River Avon, foaming over a weir 26m below, because I didn’t want to look down. 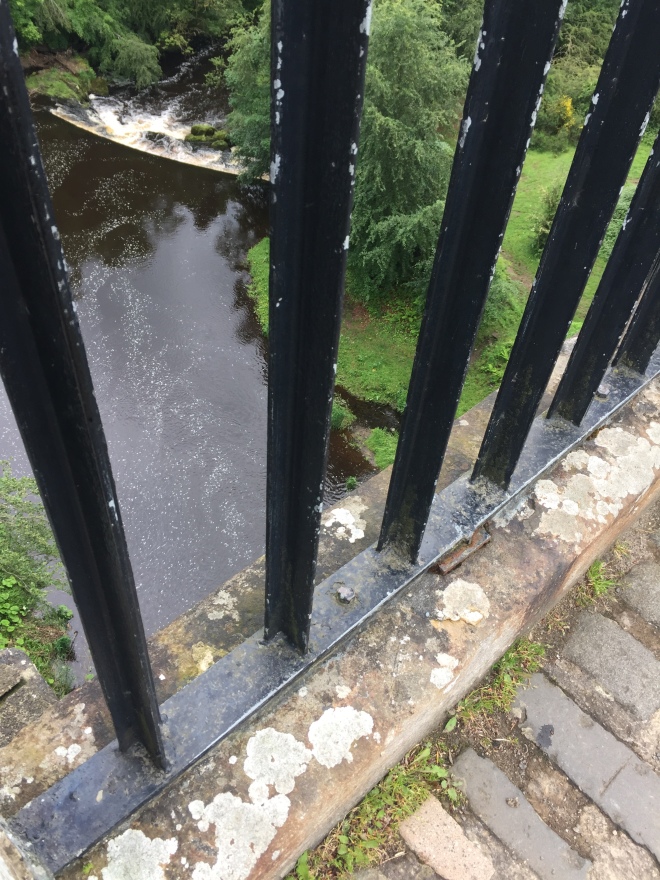 We had a bowl of soup and a jacket potato at Café 49, at about the halfway mark.

The canal winds through built-up areas as well as countryside, and at one point passes the high concrete walls of a young offenders’ prison: a grim contrast to this extraordinary life of walking freedom. We passed a Tesco supermarket which backed onto the towpath, and whilst both canal and towpath have been relatively free of litter, if not of dog waste, it was shocking to see the quantity of snack food wrappers from Tesco that were strewn all over the path.

The towpath is a widely-used resource for leisure and recreation. A group of women had hired a boat with a driver for a 40th birthday party, and passed us going slowly up the canal, eating a leisurely lunch on board. A group of teenagers had rented canoes and had decided to pull over to the opposite bank where there was no towpath for a brief stop, forgetting that when you step out of an unmoored boat onto land the boat moves backwards out into the water… We didn’t see anyone fall in, but I would be very surprised if they were all dry by the end of the day.

Other users of the river included a beautiful heron, standing stock still to wait for fish in the reeds. Its markings were exquisite, but difficult to photograph on the phone, although I did manage to take a rather grainy photograph of it flying off down the river. 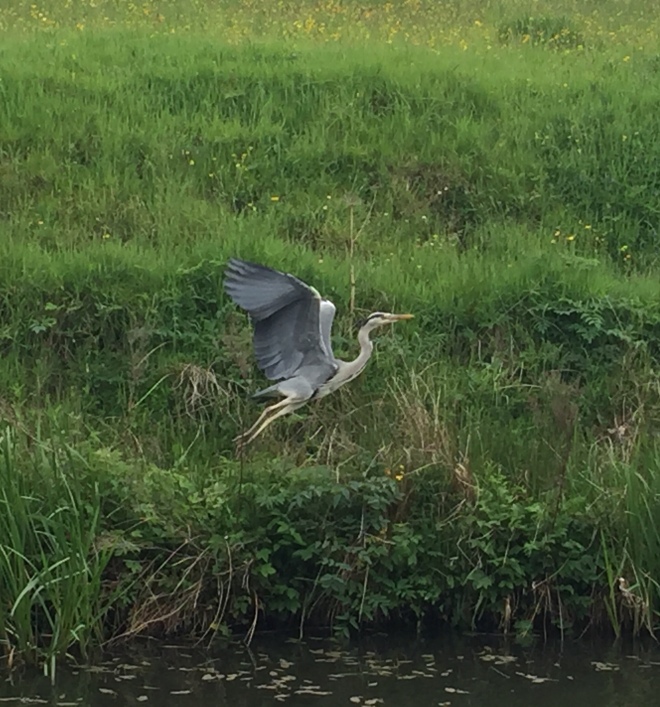 There were more swans than ducks on the river today, several with cygnets. A child-free mated pair sat on the bank preening themselves and leaving quite a lot of feathers behind. Swallows and martins darted and skimmed over the water, cleaning up large numbers of freshly-hatched insects.

As it nears Falkirk, the canal goes through a long tunnel cut 636m through rock.

Unexpectedly, it was lined with fairy lights which reflected in the water as we picked our way over the cobbles in the near-darkness.

At its far mouth we encountered the 40th birthday party on its way back a couple of hours later, the women shrieking as they went under the spouts of water dripping from the tunnel roof and singing raucously. The driver raised his eyebrows at us ironically as he passed.

Although we managed to avoid the rain all day, big fat drops started to fall just after we left the towpath to walk up the track to our campsite. In seconds there was a downpour. We sheltered in the laundry kitchen area for an hour watching huge puddles of rainwater collect in the bleak, featureless hard-standing where the campervans and caravans were parked . We whiled away the time with a cuppasoup and finishing yesterday’s blog in weak and patchy 4G, trying to keep warm as the temperature dropped.

As the car park filled up with water, we became concerned about pitching our tent, and increasingly grateful that we hadn’t arrived five minutes earlier and put the tent up before the rain began, because the “wild camping” advertised on the campsite’s website amounted effectively to a marsh. 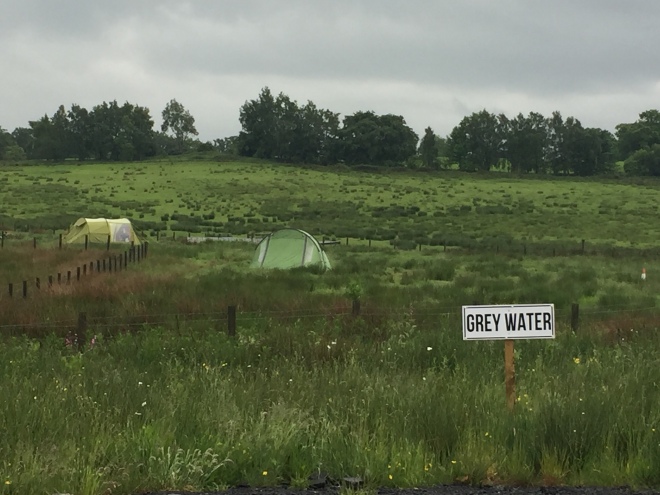 We decided to bail out of this site figuratively before having to bail out literally. Stephen managed to get enough signal to locate some glamping pods available about a kilometre back the way we had to come. I never thought to hear the words ‘glamping pods’ pass my purist husband’s lips, but was more than glad I did when welcoming Stuart showed us into their converted barn, where an enormous woodburning stove pumped out heat to the becushioned armchairs and sofas surrounding it, and a kitchen dining area was marvellously equipped with croissants, hot chocolate and everything we needed to make breakfast the next day: milk, juice, porridge, cereals, bread, butter and jam. Stuart also gifted us some lovely fresh eggs from next door’s hens to scramble.

There was even a stray black cat to curl up with.

Such luxury I never would have imagined at the end of a day when I was expecting to have to camp in the heaving rain. With four glamping pods sited next to buttercup paddocks with horses grazing, barbecue and outdoor eating areas, and huge and spotless showers in the barn, Spoke ‘n’ Boot makes the most perfect of getaways for up to 8 people. We cannot recommend it highly enough! We were warm, we were dry, we were well-fed with our camping food cooked in comfortable conditions, and our clothes dried on a rack by the stove underneath the fairy lights.

3 thoughts on “The Union Canal”