Yesterday we had been thrilled to hear a cuckoo, but at four in the morning a couple of hours of the cuckoo’s penetrating and incessant calling jaded our enthusiasm somewhat. Nevertheless we got up de bon heure to show the young DofE expeditionary force how it was done, wiped the bird poo off the fly sheet of our tent, and packed it in our rucksacks one final time for the foreseeable future: for today we reached the land of the blessed, where baggage forwarding companies service the Pennine Way. For the next 10 days we will be travelling light, carrying only what we need for that day, and saving our knees and ankles while the Brigantes van ports our bag onwards for us.

one final haul of the heavy packs then (I say heavy but Stephen’s is around 10kg with 2l water, and mine is around 8), out of the campsite and up onto iconic Stanage Edge. During the planning stage I suggested that there was a much straighter route we could take which would miss out this millstone escarpment, and I recall Stephen saying in horror that no, we absolutely must make this part of our journey. I could now see why.

Instead of walking on the top as we had done the day before, we chose the route at the bottom of the rock formations which contoured round and gave us a much better view of the actual rocks themselves whilst still allowing us views out over the land below. My climbing expert had plenty of anecdotes to relate about climbing on millstone grit, and as I listened with half an ear I mostly marvelled at the spectacle of actual millstones lying abandoned below the edges where they were quarried. They were left there when the bottom suddenly fell out of the market for gritstone millstones in the mid-18th century.

Once off the Edge, we turned westwards and down, only to climb up again onto the grouse moor which rises on the eastern side of the Derwent Valley above the reservoir. Every gate has a sign on it warning about keeping dogs on leads during the ground-nesting season for the moorland birds, and as soon as we were through the first gate the curlews were there in pairs circling above our heads whirring their haunting call, warning us off their nests. They were to be a constant over the course of the whole day, together with lapwing and grouse. The grouse I felt vaguely sorry for as we climbed up past grouse butts camouflaged by bilberry bushes. They have until the 12th of August. 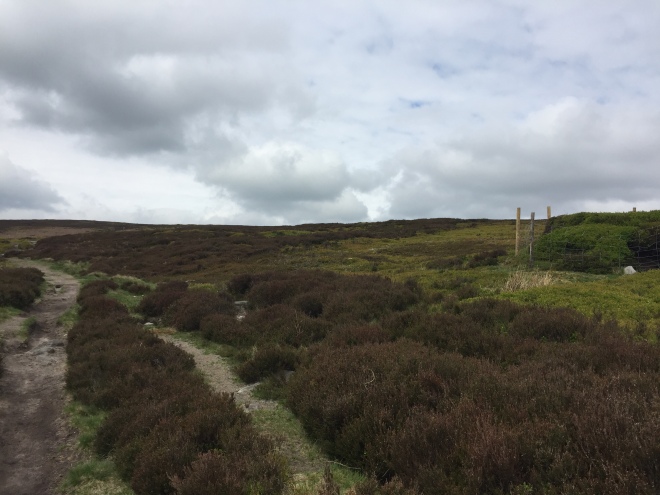 Once on top of the moor we turned right on a track which took us through the heather and bilberry and over unseasonably dry black peat bogs past a succession of dramatic stone outcrops, rounder and more weathered than those on Stanage. A mountain hare crossed the path ahead of us, the first of three we saw today, the size of a small dog and still with patches of its winter white. There were more walkers up here, Instagramming themselves on the Wheatstones, rocks resembling nothing so much as a giant stack of Scotch pancakes.

The path zigzagged down through heather and bilberry until we came to the tree line. Still the views were stunning, over the reservoir and out to Kinder Scout:

and up the reservoir out onto the far moor where our path would next take us:

The smell of the heather and peat is so evocative of moorland, with the sound of the curlews and larks, and the nearly chartreuse green of billberry leaves against the rusty red-brown of heather punctuated here and there with tormentil, a tiny potentilla, a member of the rose family. 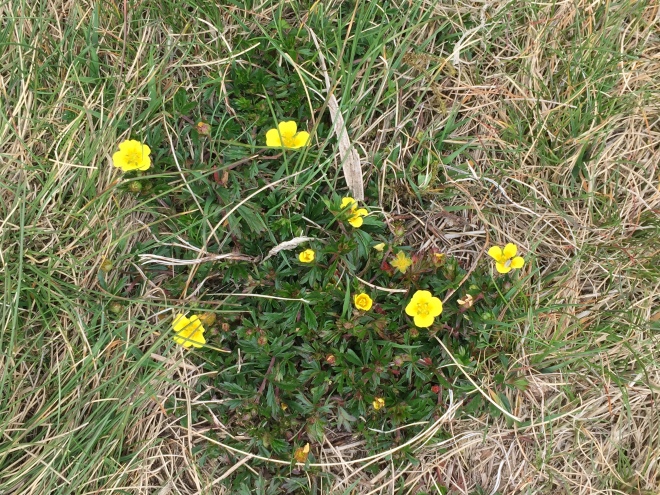 As we lost height pine and rowan saplings began to relieve the beautiful but bleak expanse of moorland.

The path now skirted the reservoir and we stopped to pool our remaining food items for lunch: half a chorizo and some biltong; breakfast had been a small fruit and nut bar and the night before – well you saw the menu. We were on our nutritional uppers and holding out for the pub grub in the Dog and Partridge.

We still had plenty of energy, however, to take on the ebullient mountain bikers at the head of the Derwent reservoir valley.

They set off along the flat up the valley but the steep rocky nose sorted out the sheep from the goats, and we soon caught up with the three slowest riders – who by this time were carrying their bikes up the rock steps. ‘Quick!’ we heard one of them urging on the straggler in front of him. ‘The hikers are catching up!’ ‘Well I am a graduate of Simon Woodward’s Elite Performance Programme,’ I thought to myself as I powered past them trying to seem as effortless as possible. ‘And trained on the gruelling South West Coastal Path.’

We even managed to burn them off again in a stylish finish by sprinting to the summit cairn where their companions were lounging about watching and waiting. I have never been in a sporting competition before. It was quite fun – and the bikers were good to chat to. And that was the last we saw of them as they pedalled hell for leather down the other side too fast for us to follow and out of our lives – another set of thoroughly good-hearted and sporting people we have met fleetingly on this journey.

We shared with them the exhilaration of the awe-inspiring panoramic views from the summit of Derwent Edge captured in today’s header photo and quotation. That feeling we had sought in undertaking this long journey, of being an infinitesimal speck on the surface of the turning world, eyes gazing their fill of the unfolding miles, ears full of birdsong on the tugging wind, lungs breathing in the clear, clear air, and heart full of joy.

The path down the other side of the moor was a easy hour and a half, picking our way over the least stony sections down to the Langsett reservoir. But by this time my feet were feeling the strain of the hard set of days again and I was tearfully relieved to reach the Dog and Partridge, take my boots off and sink into a hot bath. We have, incredibly, made it to Yorkshire. Two shorter walks now, and then a much-needed rest day to come. 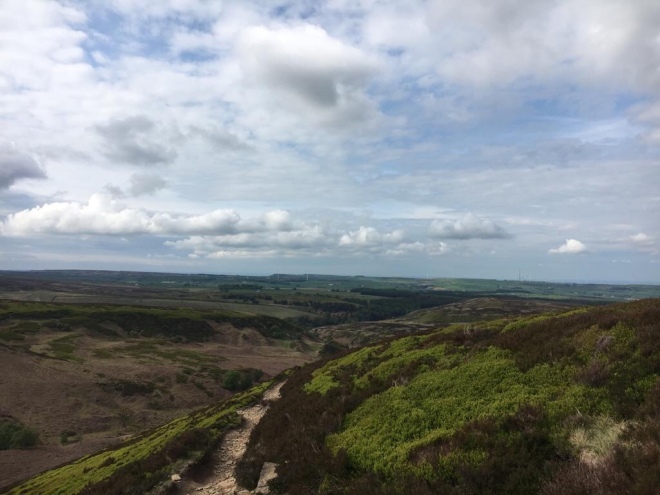