…within our labyrinth on our dark mountain. – David Jones, ‘The Tutelar of the Place’ 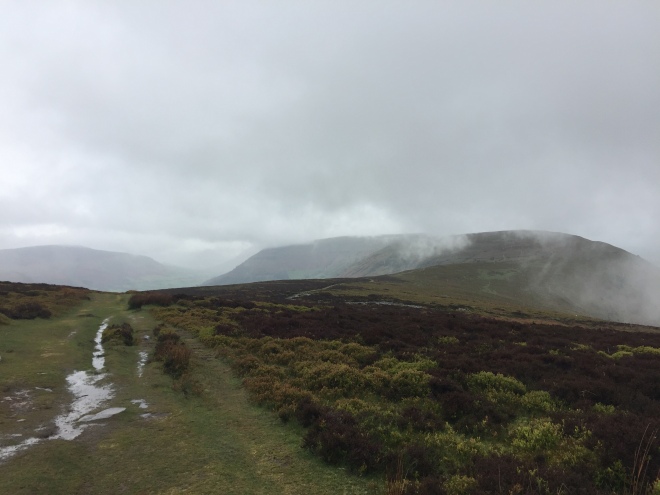 After a dramatically wet night in the Rising Sun campsite in Pandy we got up to an overcast morning, and managed to strike the tent in the dry. We had swapped breakfast for a packed lunch, and in the end we were really glad of the food, even though we have not really been eating lunch as such most days so far. The cloud shrouded the tops, and we climbed 6km straight out of the campsite up onto the flat top of the 16km-long Hay Bluff ridge – at 676m, the highest point so far on the route. 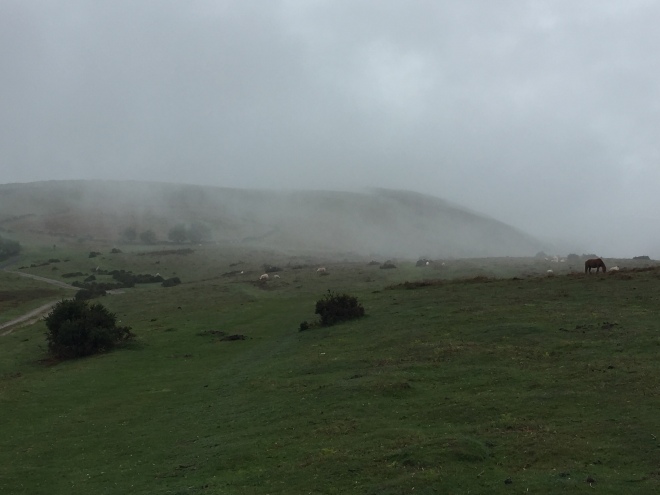 Visibility varied. The rain started pretty much as we got out onto open hillside, but wasn’t constant. The land falls steeply away on either side, and at times we could barely see more than about fifty metres ahead (the compass did come out a couple of times). Ponies and sheep loomed out of the cloud. Curlews nesting in the heather took off in alarm, as did a grouse, its whirring call and distinctive flight unmistakeable. At other times the clouds lifted: shreds of cloud tore across the hills and ripped away to reveal dramatic views down into the sweep of glacial valleys.

At first the Dyke path passes over Hatterell Common, an SSSI: it’s home to the super-rare Silurian moth which has a penchant for the whimberries (the local name for bilberries). Its Latin name, Eriopygodes imbecilla ‘roughly translates as ‘idiot’.’

Then it climbs further on to the ridge proper, and once you are up on the top you motor along for ten miles, rising gently to the iconic scarp slope above Hay-on-Wye. In theory the path extends away in front of you – except that we couldn’t see it, for much of the walk. At times it’s grass, or springy peat, at others slabs of sandstone have been laid down where the path goes over bog.

The bogs are an interesting habitat being actively conserved: jute sacks of heavy sodden wool fleeces are used to dam the water and create pools, slowing erosion of the peaty soil by flowing water. Under the black peat the soil is formed from interbedded layers of sandstone and clay rocks. Rainwater streamed through the sandy red and clayey yellow mud, and I had my head down in the rain, metronomically walking over what seemed like a partially terra-formed lunar landscape marked by piles of stones, watching the water fill up collections of hoof-prints made by the phalanx of trekking ponies coming the other way with their cheery riders. We were on the edge of being too cold; I don’t know how they were faring, sitting for hours, immobile on the top of wet animals.

Occasionally we had to detour off submerged slabs where two days of heavy rain had flooded them, or where they’d simply sunk into the soft ground, picking out a path which leaped from tussock to tussock over the boggy water. But in general we blessed the creators of this erosion-minimising path because, although jarring on the knees, it did allow us to go fast, 4.5km/hr average over the whole day, notwithstanding the 1433m of height lost and gained. We stopped briefly to eat a sandwich at a trig point and watched a red kite being mobbed by a enterprising crow. The kites are increasing their range, perhaps supported by feeding projects such as the longstanding one in Rhayader. 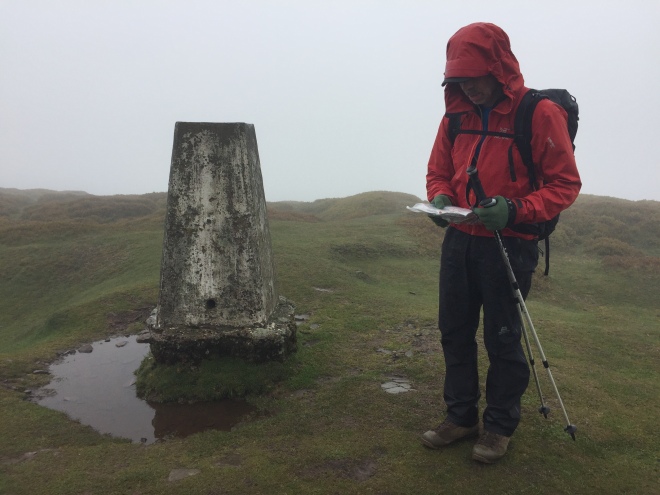 For the last two hours on the top of Hay Bluff, the rain which had appeared on the BBC weathermap in the Rising Sun as a wide, dark blue patch descended in earnest. We put our heads down, angled them slightly against the north-west prevailing wind, and simply marched through the apocalypse, rain streaming off our hoods, glasses covered in water on the outside and steamed up on the inside. We were just on the edge of having enough layers on, but it was too wet and cold to open our packs to put on anything else.

As soon as we dropped off the ridge we were in the lee of the wind and below the cloud cover. The rain stopped and Stephen’s frozen hand started to warm up again (he severed the tendons about thirty years ago in a climbing accident, and it’s particularly susceptible to seizing up in the cold).

It’s about an hour’s walk into Hay from the bottom of the scarp – a walk which served to warm us up. On the way down we decided not to camp: we were simply too sodden. We knocked on the door of Belmont House, which had the first bed and breakfast ‘Vacancies’ sign we saw, and Fran the wonderful landlady welcomed us in, provided us with a hot bath, filled our saturated boots with newspaper and washed our clothes. What a treasure. Belmont House is for sale as a going concern, if you fancy a change of career…

Stephen and I both agreed it was one of the best day’s walking we’d had. Bizarre!

A Little Something for the data nerds

Here’s the walking speed data downloaded from the GPS watch and mapped onto the elevation profile of yesterday’s route (you are pleased I am not posting this every day):

That shows Hay Bluff, 1470 m of ascent plus descent, and you can see that the up and down doesn’t really have much impact on our speed at all, but we take more breaks to check route and take photos. The slowest walking was on the way down, taking care on the steep, muddy and slippery path. We walk at a fairly constant rate, whether up or down. It also shows that in 40% of the time we did 60% of the distance along the top (and took almost no breaks because of the weather).

The graph above shows elevation and temperature. The watch was under cover on Stephen’s wrist … but still the temperature dived and heaven knows what the ambient temperature had been. It was pretty hairy up there and I wouldn’t have liked to have been walking the ridge on my own. Martin staggered into The Blue Boar about two and a half hours after us, and we were glad to see that he’d made it safely off the top. He too ordered the standard recovery drink. Timothy Taylor’s this evening.