I like it when it rains hard. It sounds like white noise everywhere, which is like silence but not empty. – Mark Haddon, The Curious Incident of the Dog in the Night-time 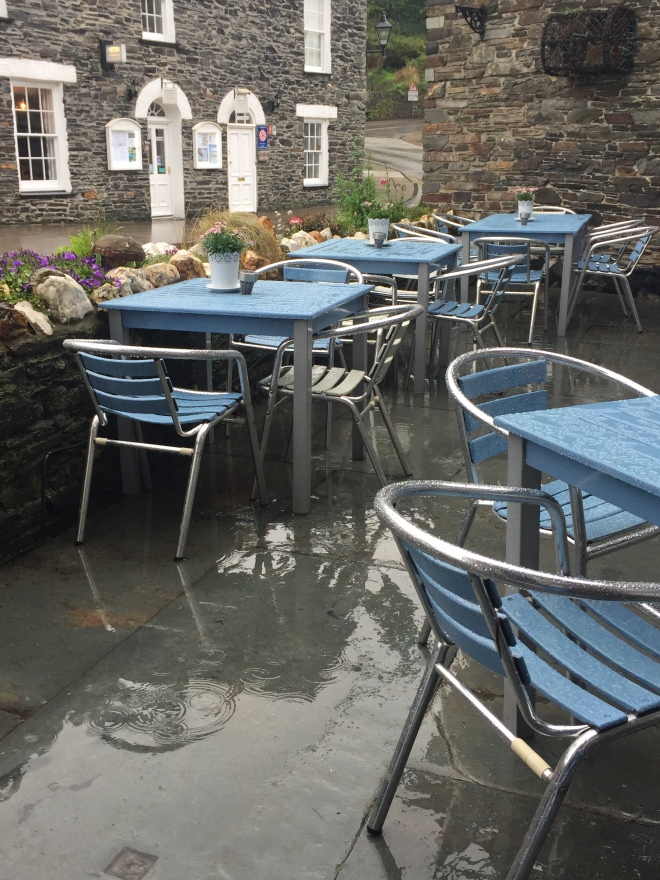 For some inexplicable reason, I have been experiencing long periods of sleeplessness during the night despite the obvious physical exhaustion of a day’s walk. Even though I wake, like today, with my head spinning with tiredness, I know that one can just keep putting a foot in front of the other with a kind of metronomic determination of the body. This is helped by having somebody else with you, in my case Atlas-like Stephen, who retains enough mental clarity to read a map.

Today’s stretch, from Boscastle to Bude, is renowned for its toughness. We estimated about 1000 m of climb, which means a corresponding thousand metres of descent as well.

One of the things I did during my hours awake in the night tonight was to check the weather forecast. I was presented with conflicting pictures. The BBC showed strong gusting winds sustained at around 50 miles an hour from 6pm onwards, and the Met Office (who have forecasted a yellow weather warning of wind) conversely advertise that these gusts will be buffeting the coastline from around 10am onwards. Clearly we didn’t want to be caught out toiling up and down slippery wet rocks on remote, exposed cliff faces like two vulnerable little ants.

Morning brought convergence of the forecasts. Both sites were predicting rain all day, but the wind from the named Storm Hannah was indeed now not due to come in until early evening. We are keeping a weather eye out on the forecast for tomorrow, ready to take an inland route if necessary from Bude to Hartland. We chatted to the helpful Richard and Louise at breakfast, feeling more like houseguests and laid plans for a quick escape route after a kilometre and a half during which we could assess conditions.

As it turned out, this was the nicest day’s walking so far, entirely due to conditions underfoot: 95% springy turf or mud damp enough to provide a bit of suspension for our feet. The rain cleared up by about 9.30, an hour into the walk, and held off nearly all day. We met some lovely people, I spotted one of my favourite wildflowers, we had the nicest lunch imaginable in our ‘three-hour break’, and we feel a giddy sense of achievement at having Conquered this infamous stretch of the route with no ill effects.

Boscastle harbour was boiling. The tide was up high, churning the water into spume washing in and out by the harbour wall. The walk started with one of the very many climbs which characterise this part of the coast; by the end of the day we had done a colossal 2730m of ascent and descent. 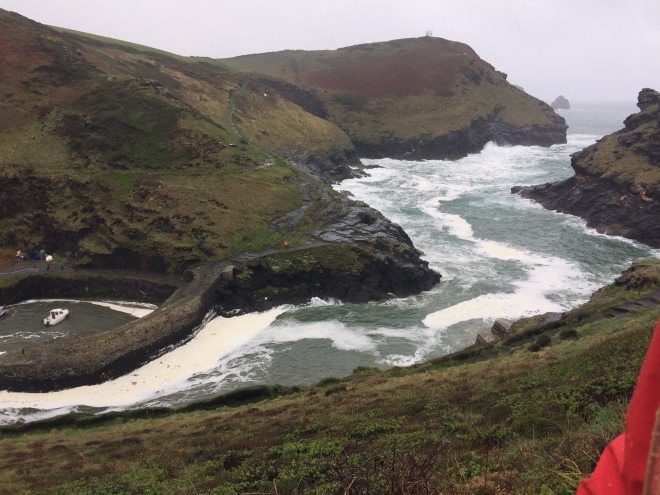 The first thrill of the day (and I do realise that not all of you will appreciate this) was that at the top of the steep hill above Boscastle was Beeny Cliff. BEENY CLIFF! And it looked wild and western, and there was a waterfall at the top which was blowing upwards. Invigorated by the sight we strode on, and the coastline was so striking that the miles seemed to pass unnoticed. It is definitely changing: the zawns have morphed into more rounded coombes, with fieldfuls of fat cows grazing on the lushest grass you have ever seen. 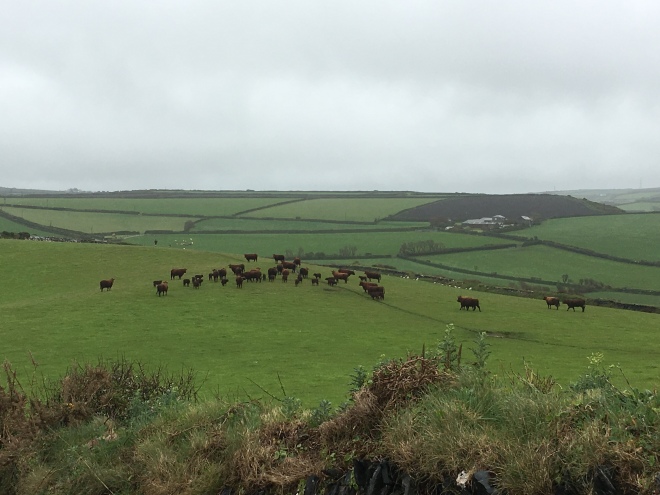 Little inland river valleys are filled to the brim with miniature oaks and hawthorns, each one sheared off by the wind to the exact height of the top of the valley and not a centimetre more. Every tree is sculpted into a slant by the prevailing wind.

The scrub was also miniaturised and smoothed by the wind, a thick mat of low blackthorn and sloe not more than 20cm high, studded with tiny cream field roses already in flower. The first brooms were competing with the gorse for the most powerful yellow on a ridge with the sea on one steep side and the rocky side of a coombe on the other. On unimproved grassland and on the edges of paths grew milk-wort, 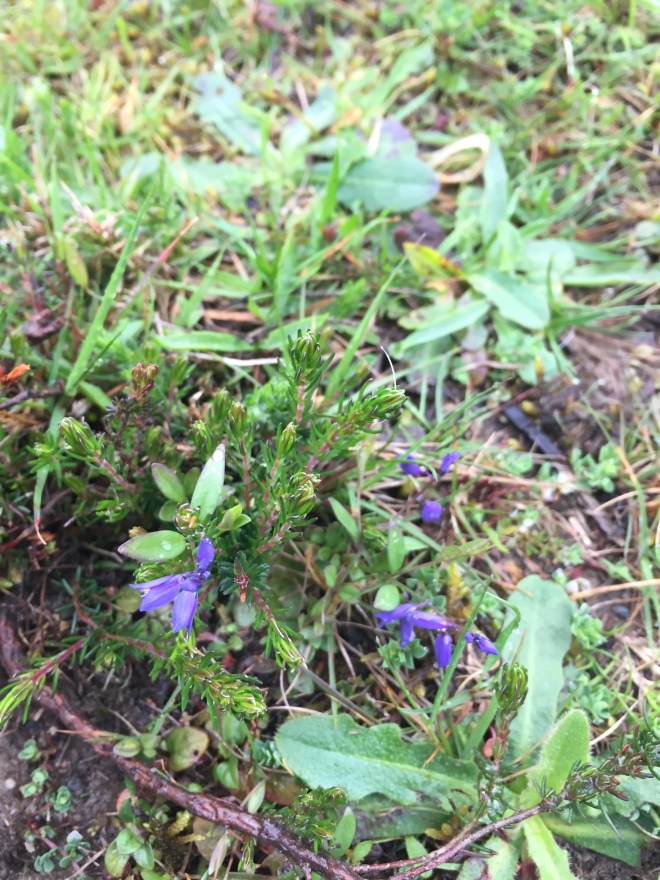 and a flower I can’t identify: 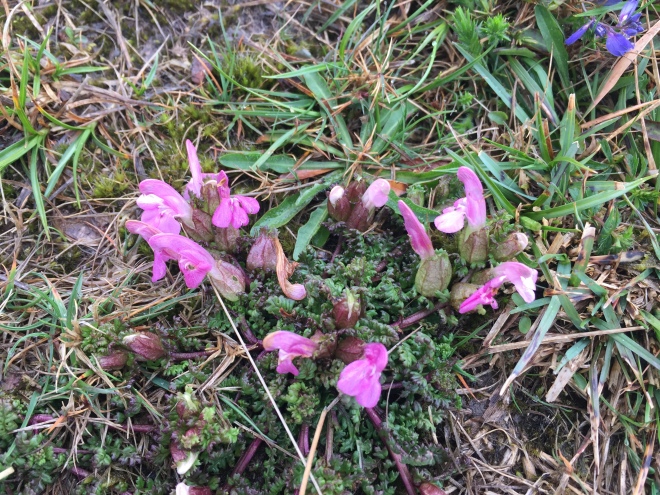 Reed buntings and robins duked it out from every other bush, singing until the very last moment we passed, and then resuming the second we’d walked by. After the sun and then the rain new foliage is pushing through, signalling later flowers: spotted orchid leaves and meadowsweet, twining honeysuckle, almost flowering, bindweed, which in Herefordshire they call ‘bearbind’, and bryony. On the floor in the inland woodlands behind the cliffs when the path took us away from treacherous edges, amongst the ferns and bluebells we found cuckoo-pint and wood avens. 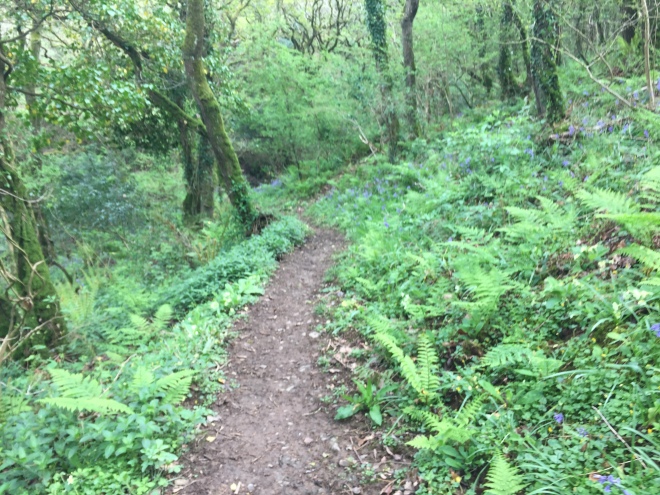 There were some phenomenal climbs (twelve in all), but the descents which were worrying us were thoughtfully zig-zagged and I turned out not to be a toiling ant after all. We came across more than one ambling pony turning on sixpences on the vertiginous slopes (including a polka-dotted one) and some goats, which Hardy neglects to mention. 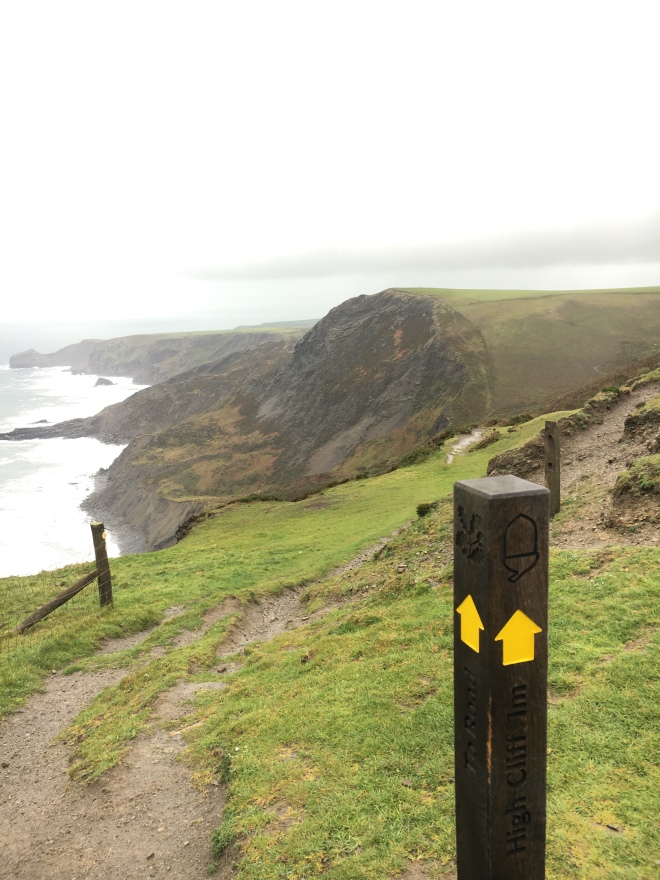 And everywhere the wind. Below us the sea heaved and swelled white, roller after roller cresting and breaking into the wash of the one before. At Mot’s Hole spume was hurled a hundred foot up the slopes, and another waterfall in the cleft at the bottom blew backwards – all over us, as we scuttled over the bridge, thinking at first it was raining. The ascent up from the bridge was the steepest yet, and the funnelling wind battered powerfully at us as we pulled up step after step, many higher than my knees, hunkering down and pressing closely into the path. We met an exhilarated young woman with bright eyes coming down, and we crouched to exchange trail notes, laughing into the wind. We worried a little more about the group of older walkers behind – but they seemed cheerful enough.

Lunch was at the smart Haven café in Crackington Haven, where we had a heap of crab sandwiches and an enormous bowl of tomato and peanut soup so thick you could stand your spoon up in it, and possibly one of the best soups I have ever eaten. In the café we met Bart, a Dutchman also walking to John O’Groats on a personal pilgrimage with a scallop shell tied to his backpack and carrying his tent all the way. His 21-yr old legs quickly burned us off by the top of the first serious ascent after the café, but I am sure our paths will cross again before the end.

Nearing Bude the land flattened. We had planned to stop a little in Widemouth Bay, but it was getting rather late (because we’d stopped to talk to all the interesting people walking in the other direction, like the builder out watching for the nesting peregrine pair which of course we did not see) and surprisingly, after all those hills, our legs weren’t feeling like they needed much of a rest. Our only stops were to put on or take off waterproofs, in a bid not to overheat, or to get out little scraps of trailfood, a few peanuts, or one of the hospitality biscuits from the B&Bs. We had a table booked at The Deck for 7:30 pm, and needed to reach the Sunrise Guesthouse in time to shower and stretch beforehand. And it was fast walking across the sand with the tide, which seemed to have been smashing incessantly at the base of the cliffs since the morning, at last going out. But the waves were still high. Storm Hannah is expected this evening. 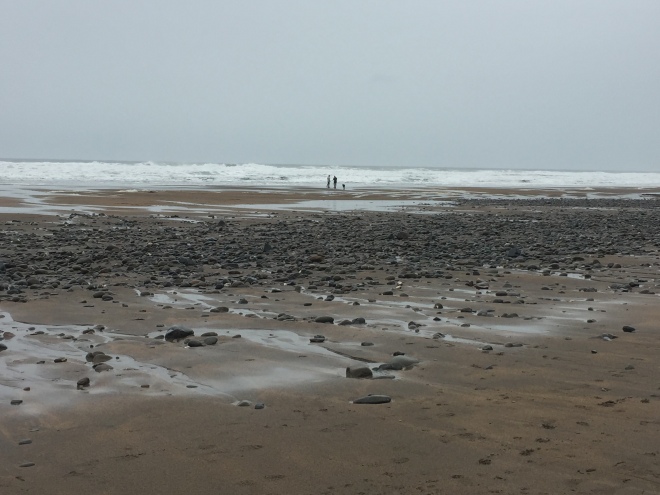 To save time we took the road route into Bude, finding scraps of verge to walk on, even with only one foot. Even that makes a difference at the end of a 27 km day. 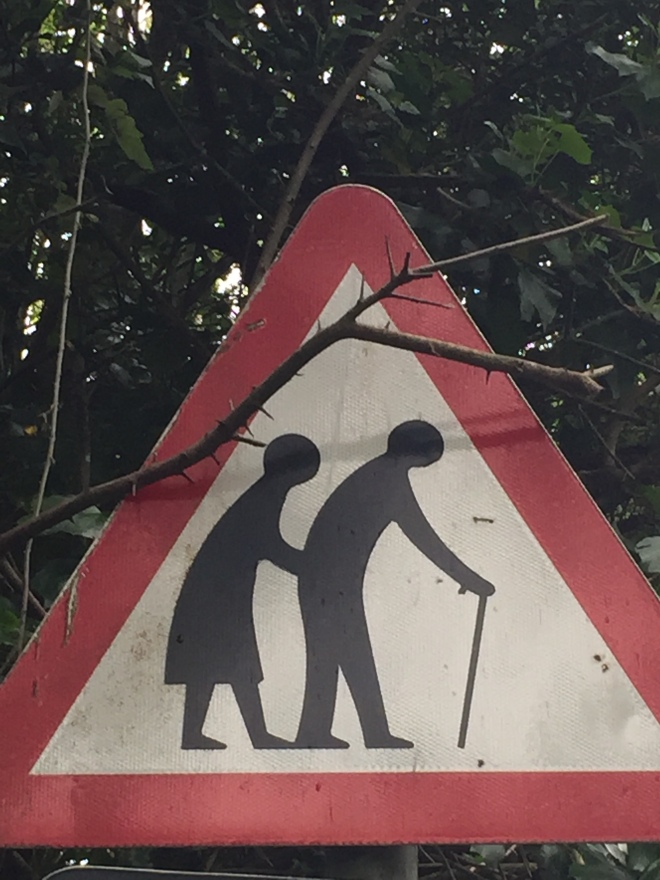 Fabulously hot showers awaited us at the Sunrise guest house, and little bars of chocolates on our pillows. We were high on the achievement at having completed a walk we feared we might have had to have bail out on, but had finished in such good shape, and smug that we had beaten the last of the rain as we came in, packs and waterproofs dry. We got punished for that hubris as the final squall soaked our dry clothes to the skin, however, walking the 400m to the recommended Deck restaurant, where we were treated with warmth and sympathy: a heating fan to help dry us off, a hot chocolate, and hanging skewers of seafood. 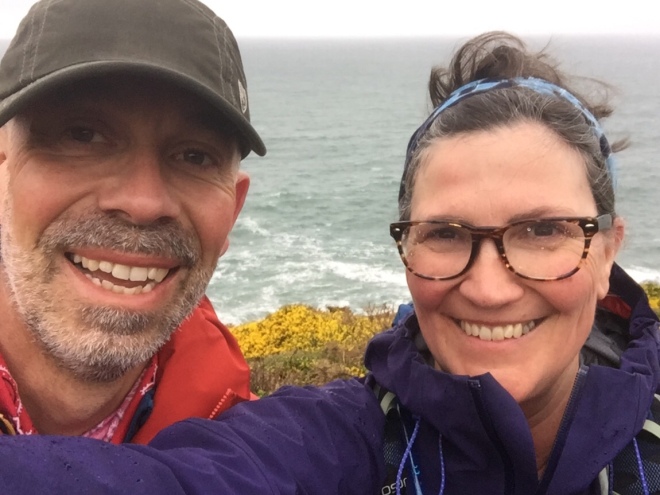 Cornish stiles (of any kind): 0