As soon as I saw you, I knew an adventure was about to happen. – Winnie the Pooh

We set off on Day 5 to walk from Mawganporth to Port Isaac. The staff at the wonderful Merrymoor were rather sceptical when they heard of our plans, but we did intend to take several shortcuts to slash the 45km distance and make it possible to do this leg today. Slicing, we reckoned we could do it in 28.

The day started with some successful field surgery. We managed to put a colloidal dressing on my poor excoriated toe, and I was flabbergasted to discover that it was thereafter completely painless. It held up for almost 30 km in the most heroic way. Fervent shoutout to the pharmacist in Newquay Boots.

For the first time we put on longsleeved tops and trousers and although the rain wasn’t forecast until about 10 we found ourselves putting on waterproofs pretty much from the start. The cooler temperature was most welcome, though, and in the final analysis it’s very satisfying not to have carried items of clothing in our packs in vain. We even had the mental free space to chat, much more than before.

The landscape in this section was distinct once again. The tops of these cliffs were much lower, and green as you like: seemingly excellent agricultural land. Some of the tracks seemed more like Herefordshire than Cornwall, except for the clouds of seagulls swirling behind the ploughing tractor. The shoreline featured oystercatcher-catching rock pools forming in the flatter rocks.

The sky was darker all day. Peppermint sea thrashed and boiled around the black rocks below, but on our high-level walk larks accompanied us all the way.

Our shortcuts weren’t all over farmland, though: to make the day work there was a fair amount of road walking too and we have become micro attuned to (and in my case obsessive about) conditions underfoot, choosing grass over beaten earth over stone path. I spent a fair amount of the day cursing considerate farmers who made good and lasting hardcore and gravel paths. There were new wildflowers today in the Cornish hedges and verges: chickweed, eyebright, pineapple weed, burdock, chicory. Instead of the wild garlic onion, one Cornish hedge was topped with a froth of the wild garlic we are familiar with, and spotted with harts-tongue ferns amongst the Alexanders. Sections of the Cornish hedge today were laid in a herringbone pattern (perhaps sardinebone isn’t so structurally effective). 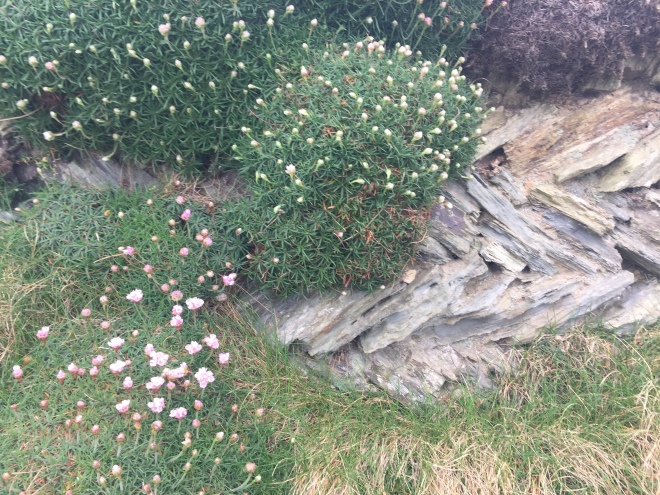 After a bucolic morning, then, the Adventures started in the early afternoon. There was the thrilling moment where we caught the ferry across the River Camel from Padstow to Rock. The walking alternative is a massive detour around both arms of the estuary to Wadebridge. No.

The ferry bizarrely disgorged us onto the mudflats … not exactly a State Reception. But imagine our absolute delight when the cafe we went into to warm ourselves and rest our feet offered a sumptuous Cornish cream tea.

A long road section followed. Silverweed, self-heal, bird-in-a-bush, stitchwort, herb Robert, vetchling, tansy, sweet woodruff… I needed to keep my attention on the road, however, since the drivers of all the BMWs, Jaguars and Mercedes certainly were not keeping all their attention on us.

The shortcut took us through a clearly-marked footpath. However once we had committed ourselves and gone through the farmyard where the path started, we began to sense that we were not welcome: gates were chained shut and topped with barbed wire. This was a dilemma: adjusting the route simply wasn’t possible. This ex-footpath (although clearly marked on all the maps available to us including the most recent one online through OS mapping) was essential to making the shortcut work.

The farmer had made enormous efforts to ensure that the path could not be followed. There was barbed wire everywhere. Field edges were full of docks and nettle, or else churned up by tractor wheels. Of course there was a substantial stream to cross and a double barbed wire fence to get to it. This was proper hard-core SAS stuff: I actually commando-crawled under a gate after hurling my pack over the barbed-wire top, and we used a fallen oak tree as a bridge to cross the stream.

It was clear when we crossed over into land belonging to a more friendly farmer. Gates were latched rather than chained. But even here there were challenges: a herd of bullocks was particularly interested in us and I was grateful we both had sets of walking poles we could brandish in a confidently threatening manner. It was like some kind of landscape-based escape room. We began to despair of ever finding a way out. But at least we were on a bonafide footpath again.

We stumbled through the final gate to find that we were almost on the outskirts of Port Isaac. Only another 2 km to go. Here the road less travelled was mossy and lacked wear – a gift from our friend Lydia who had wished moss for us underfoot.

But after 30 km there was a final ordeal to be faced. The long road into Port Isaac had a 25% gradient. And our bed and breakfast was on the other side of the village up the unpromisingly-named ‘Back Hill’. It was mentally really difficult. But as we were looking at the map exhaustedly trying to work out which of the twisting streets we needed to head up, a woman passing, the soul of kindness, asked us where we were looking for, took time to figure it out, and she mentally rejuvenated us just enough to get up the 25% gradient on the other side of town.

After physical rejuvenation in the B&B’s miraculous spa bath we headed out for some food. Spurning Nathan Outlaw’s two Michelin-starred joint we decided on a promising pizza place called The Angry Anchovy. Fully Booked. Turns out the entire cast of Doc Martin had taken over the whole place for the evening.

What about Doc Holroyd, though, eh?

It was back down the hill.

Today’s fly–through with photos and elevation