As the stats for the day show, today was hard. This was odd, because on paper it wasn’t going to be that difficult. But physically and mentally, by the end of the day, we were both absolutely wiped. Overnight it had bucketed down. The tent was the wettest it has ever been, and at the end of the day we had to pitch the flysheet and groundsheet wet and leave them to dry out while we went hunting for a place to eat.

Nonetheless the day began well with a high quality breakfast from one of those brilliant Scottish bakeries: rhubarb and ginger pie, apple and frangipani tart plus some lovely coffee, got us off to a good start.

The sun was out. We had decided to do a bit of road walking in the morning instead of following the route of the Douthern Upland Way, just to cut out a little bit of hill and it turned out to be a good decision: there were excellent cycle paths all the way, and in the sun everything was sparkling after last night’s rain,

even if the Queen Ann’s Lace was looking rather worse for wear.

The Southern Upland Way was signposted with a thistle. This was appropriate because it was the first day that I saw a thistle in flower. I have been watching for them for weeks, and today was the day.

Being out in the sunlight felt novel, wonderful. Everyone was smiling. Even the electrical workers up their pylon. 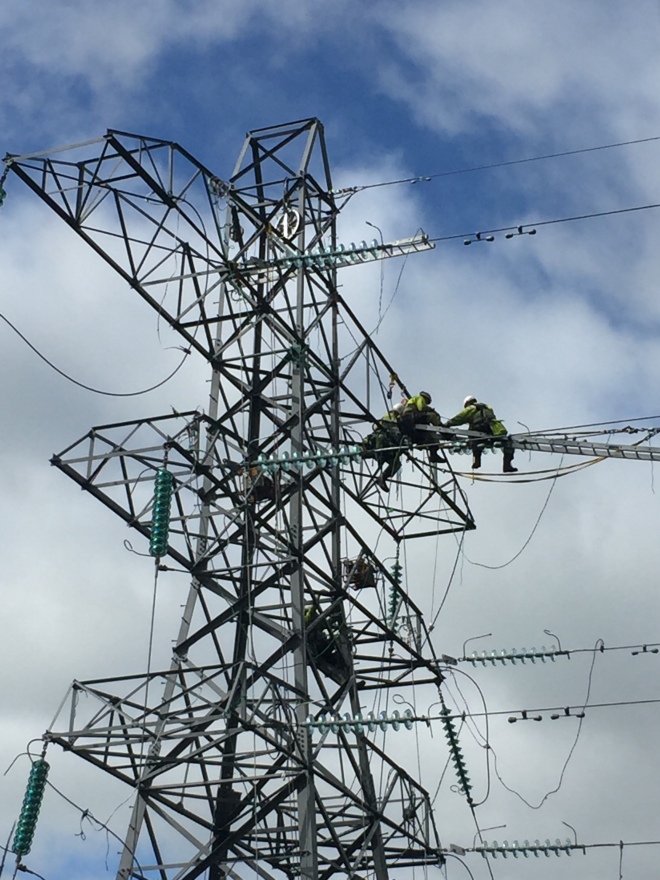 and there were other interesting jobs being done too, like tree planting with a huge tractor bucket full of dung.

And that was the nice bit of the walk. For some reason the rest of the day went downhill as we went up. Partly it was because I needed to spend several hours thinking about planning for school, and partly because the path needed visual attention and we couldn’t appreciate the views, and partly because it clouded over quite significantly and blocked out a hell of a lot of light. There was a fair amount of mizzle too. Although we didn’t bother to put on our jackets, we stopped to apply smidge wipes in an effort to repel the midges. Every so often I lifted my head and took a picture – like many of the photographs I have taken since Malham Cove ten days ago this one has needed editing to lighten the exposure, because as they are they are too dark to post. It seems a long time since we have seen proper sun which lasts more than a few minutes. 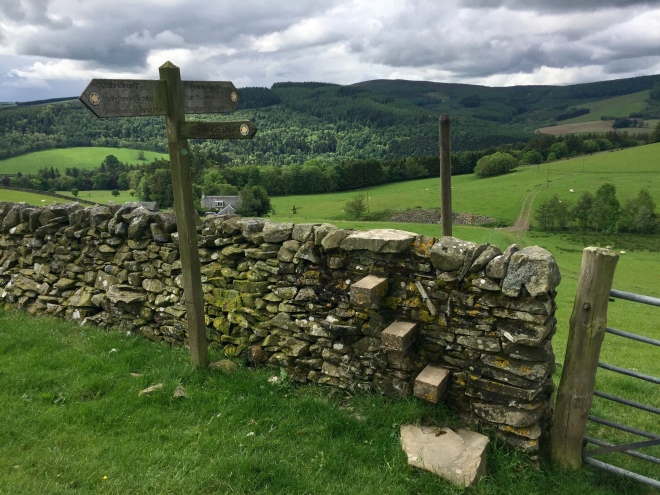 Most of the route today took us over a remote area of managed forest covering a series of high hills. We climbed steadily for an hour and a half up wooded valleys, stopping to shelter from a shower under a tree with a mossy bank scooped out of the red earth at our backs, to eat the rolls we’d bought from the bakery this morning.

We stopped briefly to admire the damage done by a colossal beech falling in high winds, taking with it a substantial pine tree and gouging a huge scar in the oak tree which ultimately stayed it at a dramatic angle. Firewood for years.

The tops, when we reached them, were a series of undulating rounded peaks of bilberry and heather, with what on any other day would have been dramatic views out over the sparsely populated Borders. Many of these hills are called ‘laws’ (Broomy Law, Hare Law) from the Old English hlaw meaning a rounded hill.

As we climbed further on the old drove road, the 800-yr old track over Minchmoor which at one time was the main road through southern Scotland, the hill names changed to ‘knowe’, (Wanderer’s Knowe, Brown Knowe), from the Old English cnol, the rounded hills which are often associated with fairies. Discovering this afterwards made a lot of sense: as we climbed through the muggy, murky air we were both affected by increasing disquiet.

The complex hyrogeology of these hills has formed damp, twisting forested gullies which must trap the moist air from little burns, creating isolated pockets of low mist which blow along the forest edges. At least this must be the cause, or something like it, but up there in the stifling, humid silence one could easily believe that it was the spirits of long-dead Borderers, mustered by William Wallace in 1297 as he lay in Wallace’s Trench (now marked by a stone), or the cavaliers of Montrose, fleeing from the Battle of Philiphaugh in 1645.

The wisps of mist preceded us in the most intentioned of manners as we put one foot in front of the other, trying to think positively, past the impenetrable, thick darkness between the trees.

On Minch Moor itself the road passes a bubbling spring of clear water. This is the Cheese Well, named after the propitiatory gifts of food left for the fairies by travellers. 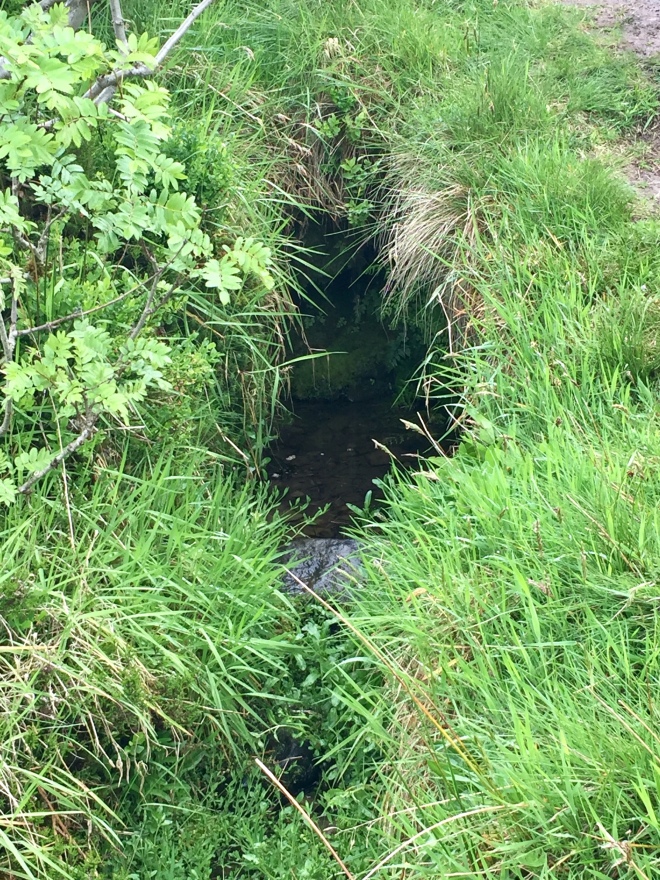 Coins had been left by passers-by on the carved stone which marks the spring. I piled some of my dry-roasted peanuts on the edge of the stone and Stephen added to the number of coins. I will admit to privily thanking the fairies, or the genius loci, for safe passage: it was a remarkably unsettling landscape. 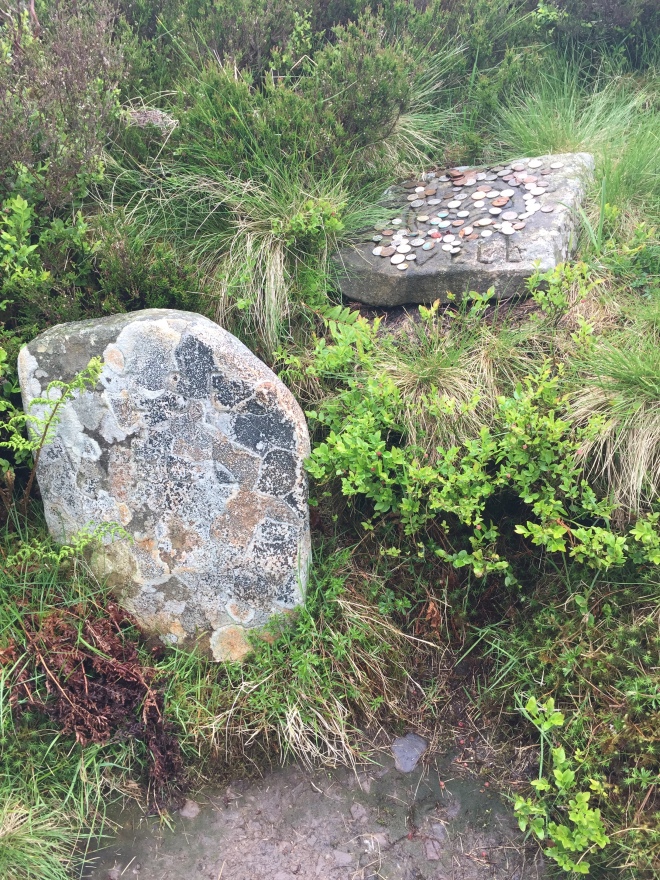 Whether the fairies were placated or not, from this point on the contours dropped steadily and the sense of atmospheric pressure lifted. In more clement weather the area must be beautiful: we passed a living sculpture , a series of long ovals of short-cut heather which resolve into circles when viewed from a particular point.

Further down the hill towards Traquair carved slates named horses, with fragmented stories of their ‘memories’ captured in the stone.

We finally made it down to the road at Traquair, the day’s end (passing a field of sheep freshly-sheared to a brilliant white), but to reach our campsite had a further 3km of road-walking to get us to Innerleithen. Drained, we pitched the ground- and fly-sheets and left them to dry out while we went to the Corner House Hotel (where unfortunately they didn’t have rooms available, otherwise we would have taken one). Over a grand supper we met David, a fellow walker on the End-to-End Trail, and chatting to him about our experiences over the last six or so weeks helped to finish the day in a much happier frame of mind. And freed from the gloom cast over us by the hills and the weather we remembered how many lovely things we have seen and done over the past couple of weeks. It seemed hard to cast a patronus up there, though.

The area around Innerleithen is renowned for its mountain biking trails. We found an online map of these, and amongst the many imaginative names for the various trails, we were not surprised to see Spooky Hill and Spooky Valley. Evidently we had not been the only ones unsettled by the fairyfolk of the hills of the old drove road.

Calorie burn: 40% higher than yesterday, despite the walk being only 4km longer

Max heart rate (caused by being unnerved by fairies): 160bpm

3 thoughts on “Feeling low up high”